A message on my machine alerted me to this event & with nothing else scheduled that night I drove down to check it out. I immediately found my friend poet & publisher Dayl Wise & we grabbed seats up front behind Andy Clausen & Pamela Twining, then we were joined by VFP Board Member & editor of the VFP newspaper Peace in Our Times, Tarak Kauff, & Ellen Davidson, photographer for PIOT. It was an evening of (mostly) poetry, with some music, prose & a video thrown in. The Woodstock Community Center quickly filled to capacity, with more chairs being added. 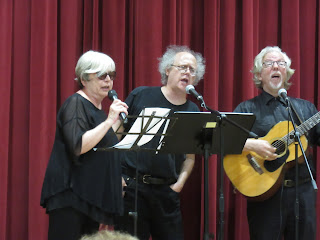 To set the tone of irreverent commentary & deep historical relevance, Mikhail Horowitz & Giles Malkine began with their take on the Bob Dylan tune “The Times they are a-Changin’”, then, with jazz vocalist Pam Pentony, a version of the Pete Seeger tune “The Bells of Rhymney” re-cast as “The Cops of LA.”

Yarna Martin followed with a political rant on the phrase “In Chief...” Michael Brownstein read from journalist Greg Pallast, then a series of his own pieces, from Kali Ma to “After Patriarchy Collapses & Capitalism Crumbles.” Peter Lamborn Wilson's little prose pieces challenged our way of thinking about everything, as he usually does. Chuck Stein, in identical black hat & cane a Tweelde-Dee to Peter Lamborn Wilson’s Tweelde-Dum, did a couple of pieces including the “Twin Lakes Goddess Poem.” Robert Kelly was led to the stage to read somewhat hoarsely from a long anti-fascist rant that included his editorial remark, “poets speak when no one listens - that’s how we know it’s poetry.” 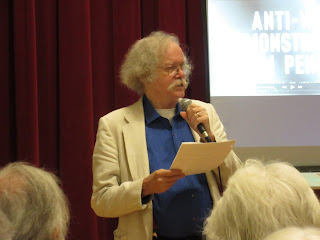 Ed Sanders informed us this was the 50th anniversary of the levitation of the Pentagon by the Fugs & a gang of hippies & peaceniks during the protests against the Viet Nam war, showed a video of the White House & led the entire room in the chant “Out Demons Out!” Brenda Coultas read 2 poems, “If Whiteness” & a piece on fracking “A Gaze.” 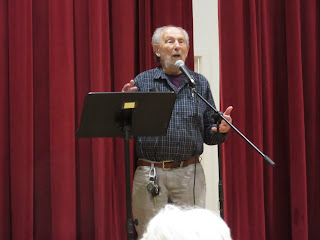 World War II vet & anti-war/anti-fascist activist poet Jay Wenk began with expressing his love of his home, Woodstock, then read his stunning piece on the suicides of veterans “Thank you for Your Service,” then a story about ways of dying in his war in Germany “I’m Gonna Tell You.” Sparrow did his usual goofball schtick of one-line punch-lines without jokes. Pamela Twining’s poems ranged from the short childhood memoir “Duck & Cover” to the more up-to-date “Water Wars.” Andy Clausen rang out the night with an excerpt from a long poem, “Insurgency,” filled with extensive lists of iconic names & Whitmanesque catalogs, a perfect way to fill out a long poem.

In addition to the poets on stage, there were many other mid-Hudson poets in the audience — this was in Woodstock afterall. Let’s just hope that Ed Sanders’ chant — “Out Demons Out” — will take effect. Perhaps it just needs a few days to work itself down the I-95 corridor.

For more photos from this event check out my flickr! site.
Posted by DWx at 8:45 PM