Tonight I invoked the Muse by reading 2 poems by Jim Spurr from his chapbook Open Mike Thursday Night (Village Books Press, 2010), “Patriotism” & “Lady Across the Way,” one of the great Oklahoma poets who left us for that open mic in the Sky in September.

Here the first open mic poet was Alan Catlin, who said he thinks he met Jim Spurr on line, began with a bartender poem about New Year’s Eve, “The Conga Line from Hell.” Joe Krausman read a piece titled “King of the Free Lance Writers” about the prolific American author Richard Gehman (1921 - 1972). Sylvia Barnard read a short, new poem about her father’s trip as a young man with a herd of cattle on a train to “North Dakota.” Frank Robinson’s poem “The Second of May” is from his charming chapbook Love Poems (Verity Press International, 2014) & was a funny piece in rhyme about the day he met his wife. & that wife was the next poet up, Thérèse Broderick, with a poem about a “butterfly zoo,” “Within the Mariposario,” weaving in English & Spanish phrases.

The next poet will be the featured poet here next month, Adam Tedesco, who gave us a preview with a poem of colors & San Francisco “Yellow.” Jessica Rae read a bus poem, a little love poem to Albany, “Central Ave.” Chad Lowther read from his Airbook a poem constructed from phrases heard in a lecture on Moby Dick from a University course on Herman Melville, “Staring at Rolling Seas.” I was the last poet in the open mic with “The Night Sky,” a poem recently published in the online journal Pine Hills Review. 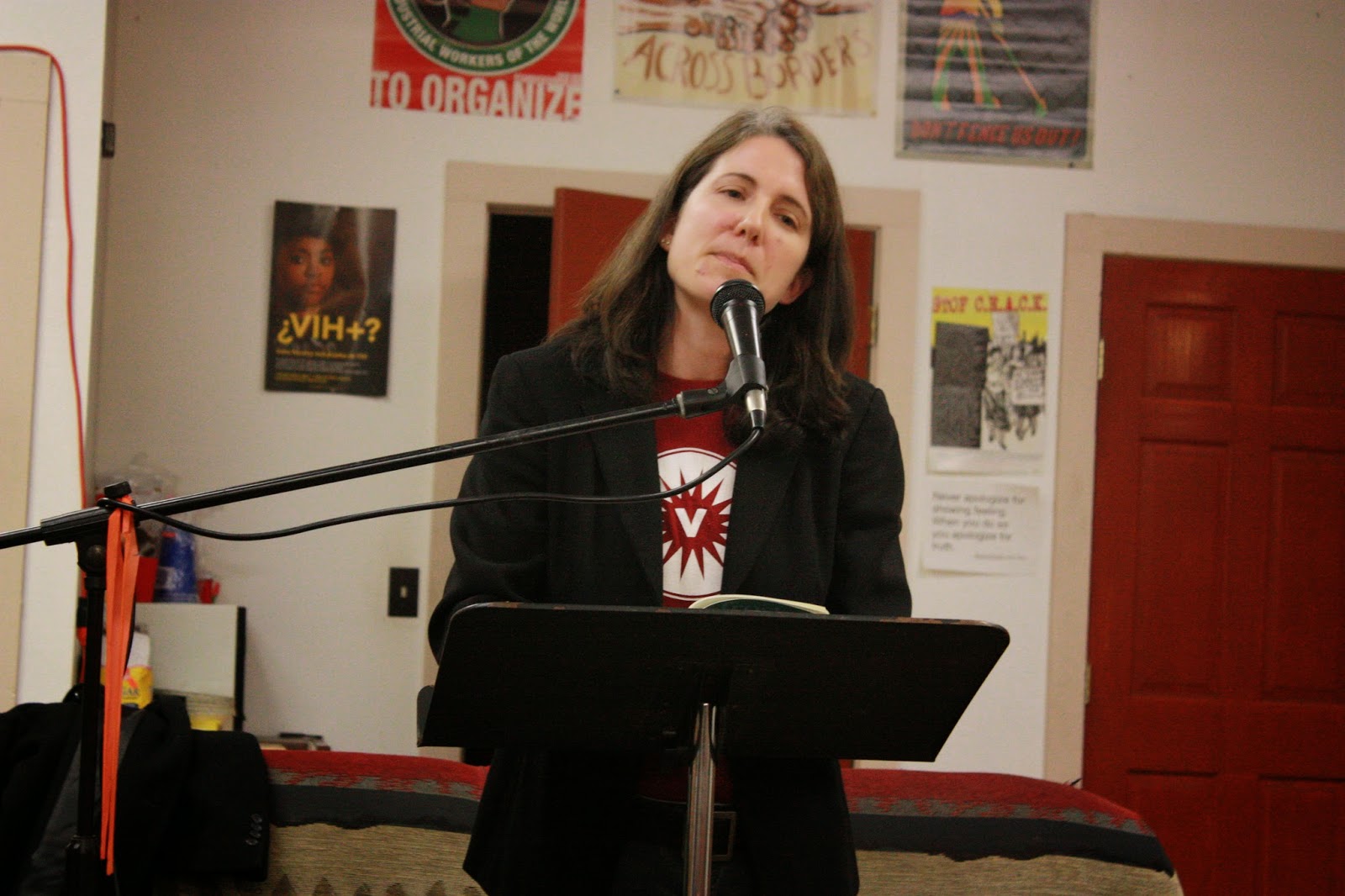 I’d met tonight’s featured poet, Karen Skolfield, at this past year’s Split This Rock Poetry Festival & when I found out she lived in neighboring Western Massachusetts, I invited her to read in this series. She began with the first 3 poems from Frost in the Low Areas (Zone 3 Press, 2013), “Where Babies Come From,” “Homunculus” & “Art Project: Earth.”  Also from the book “Lost Mountain” & “Rumors of Her Death Have Been Greatly Exaggerated” (“dancing around” her military experience), then on to another poem (not in the book) from a series based on Army training manuals, “Army SMART Book: M-18A1 Claymore Mine” (on the limits of the imagination). Other new poems were “Double Arm Transplant,” & the new, never read out “On Veterans Day My Daughter Wishes Me Happy Veterinarian’s Day.” She ended with 2 poems from the book, “Chiromancy” & “Frost in the Low Areas” (because she likes to end with weather poems). A relaxed, playful reading full of description, laughter, often with family members as bit players, taking an idea & playing it out in a conversational tone.

Thanks for calling my book "charming!" Do you take notes at these events, or is your memory that prodigious??

Frank -- my memory is quite less than "prodigious" so I take notes, usually in a "reporter's notebook" which fits nicely in my jacket pocket.
-- DWx