I was having dinner at the bar, eyeing the pretty staff at McGeary’s when the poets started coming in, heading to the backroom, so I followed them. Mary Panza was the host for yet another Poets Speak Loud!, tonight featuring poet Mike Jurkovic from down the Hudson.

Everyone had left the #1 spot blank so I signed up & read a couple of pieces I’ve read before, “October Land” based on the opening of T.S. Eliot’s “The Waste Land,” & a poem I first read many years ago at the QE2, the scandalous “Prayer.” Joe Krausman followed with a couple of food poems, “Food for Thought” & a poem about thinking about lions while fancy dining. Sylvia Barnard’s 2 poems were about her mother, first “Learning Greek” then “Last Farewell” after she had died.

Shannon Shoemaker read a new poem she hadn’t read out before with the tentative title “Phone Booth” & then was about to sit down, but Mary Panza called her back & she attempted to perform “Tongue in Cheek” but had to abandon it — great opening likes just the same. Thérèse Broderick was really tempting fate (& me) with, first, a poem about the death of her cat, then a lyric about a dead puppy — again, no comment. Frank Robinson followed with a trio of poems from his chapbook Love Poems (Verity Press International, 2014), “No Jive” (Thérèse at 50), then a poem for Mother’s Day, & a poem, “Genesis,” about how they met. 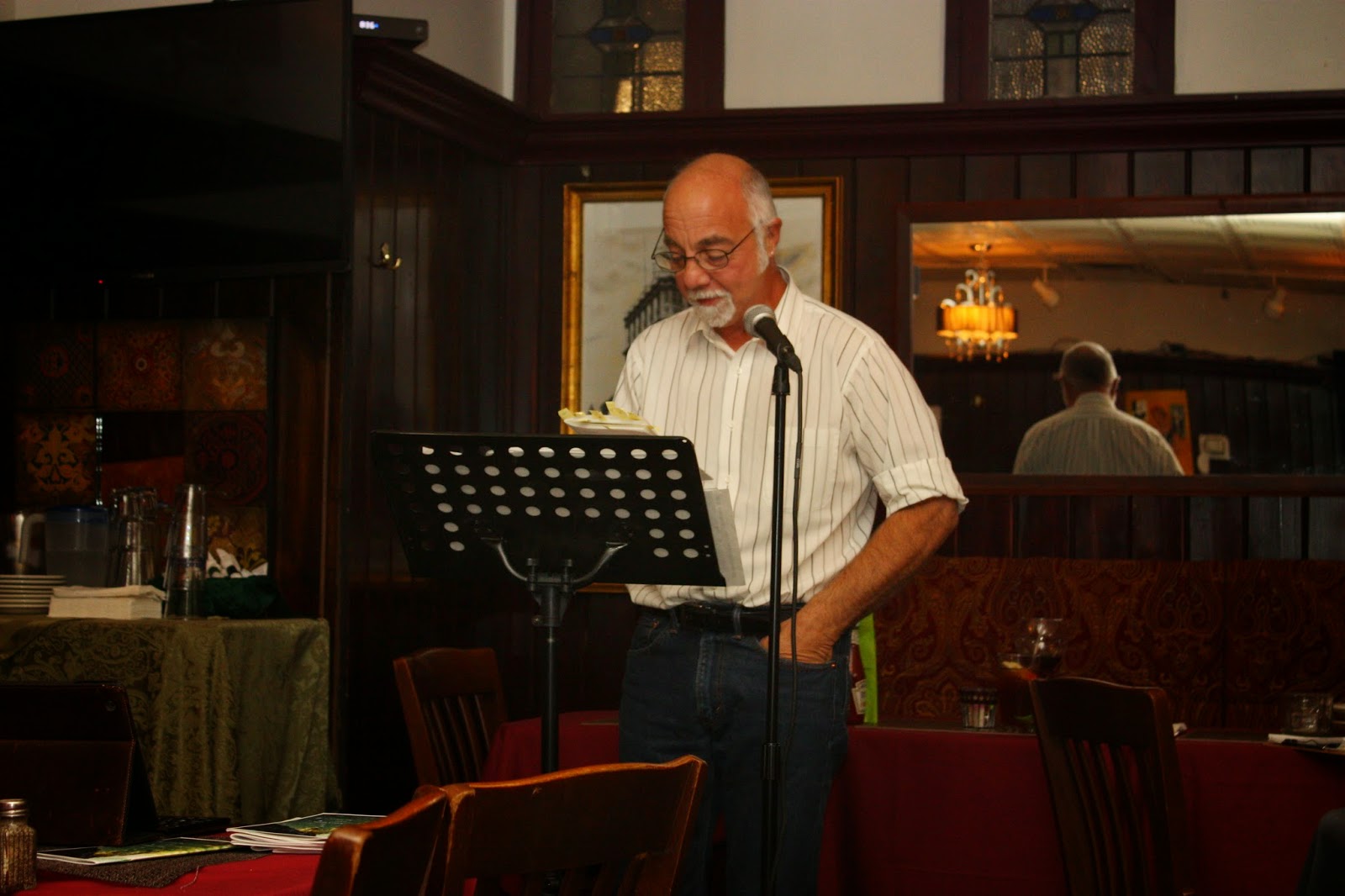 Mike Jurkovic has been reading around a lot lately, promoting his new chapbook Eve’s Venom (Post Traumatic Press, 2014), which I’d already bought, but it is always fun to hear Mike read. He began with some poems not in the book with minimal introduction, because his poems often tell a story, cynically pondering the world around him, such as a poems about being stopped at a traffic light next to “the dwarf Morpheus,” or “Crows Gathering at the Grey Sky,” or “Andy Martin’s American Letter.” Then to poems from Eve’s Venom, some read without the titles, “New Frictions,” the hysterical “Bio-Hazard,” “Yearbook,” “The Girl and Her Parachute” (another encounter along the road of life), “It Was a Nice Day,” & “Curator.” He finished with another cluster of new poems, many very short, but I particularly liked one about a girl with a broken doll. Appropriately enough he ended with “Close.” In the past Mike would wander the room performing his poems, tonight he stuck pretty close to the mic, his poems doing the wandering.

Pat Irish got us back into the open mic with a poem by someone else titled “The Foxholes of Hollywood,” then read his own poem about creatures from the movies “A Halloween Party.” Don Levy imagined the (for him) unimaginable, “Life Without FaceBook,” then a fantasy of picking up a Bible student, “Gaytheist.” Cheryl A. Rice began with a poem about “Dioramas” then on to a stirring poem about hearing about the death of “Paul Newman at the Dodge.” Adam Tedesco managed to mention Hoffman’s Playland in a poem about death & defiance “I’m Only Going to Show You This Once,” then another grim piece, with a playful title, “Games.” 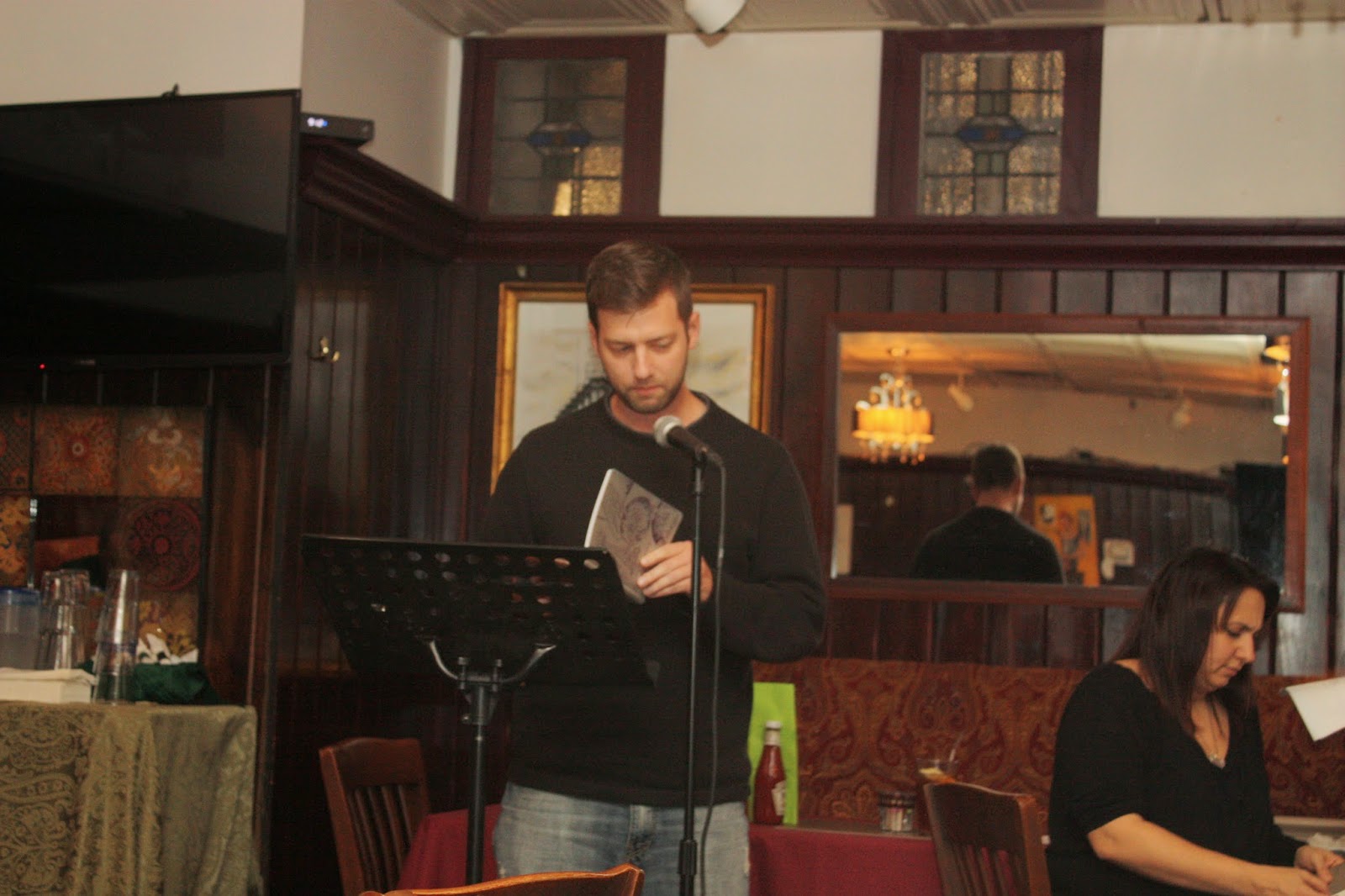 I hadn’t seen Ed Yetto before, & he began with a stream-of-consciousness dated journal entry mixing demons & blue curaçao, then to a defiant night-time monster poem “Dear Door-Sucker.” Sally Rhoades began with a poem about a native chief at the Scissortail Creative Writing Festival, then a poem to her husband “Old Love” & she said the title in Turkish, then a poem to her daughter who just got married. Brian Dorn ended the night with a poem written for the (yet-to-happen) roast of Mary Panza, “Reality Bites,” with Mary (as actress Jeanane Garofalo) & Thom Francis as movie characters — aren’t they?

Poets Speak Loud! is in McGeary’s backroom each last Monday of the month, in Albany, NY 7:30PM (or thereabouts) — come early & enjoy the food & excellent service from the lovely wait-staff. See AlbanyPoets.com for details.
Posted by DWx at 7:01 PM

from Therese L. Broderick -- sorry about the two poems about ... (I won't say it)