The last of the season here at the Pine Hollow Arboretum, until the thaw in April, with featured poets Joe Krausman & Me (DWx). Alan Casline was the host.

Brian Dorn was the first of the open mic poets, beginning with “Changing Ways” (of seasons, of life), then a poem he said he has not read out before “Under & Over.” Alan Catlin’s poems were from a series of animal poems, “Armadillos at the Ball Park,” “Guide Dogs with Lead Harness Consider Trench Warfare,” “Elephants at Low Tide” which is the title poem of a new collection. Paul Amidon began with “School Concert” & “Report Card” (his grandfather’s) & one in a “Diner.” Mike Connors read Archibald MacLeish’s poem “Ars Poetica” then a funny “Cranberry Day,” & a poem written yesterday about a maple tree “Forlorn Women of Autumn.” The genius behind the Pine Hallow Arboretum, the planter of trees, John Abbuhl always reads in the open mic & tonight read 2 short poems, “Clearing” & “The Fog Will Clear” then a short, concise essay written recently “The Unity of Reality.” 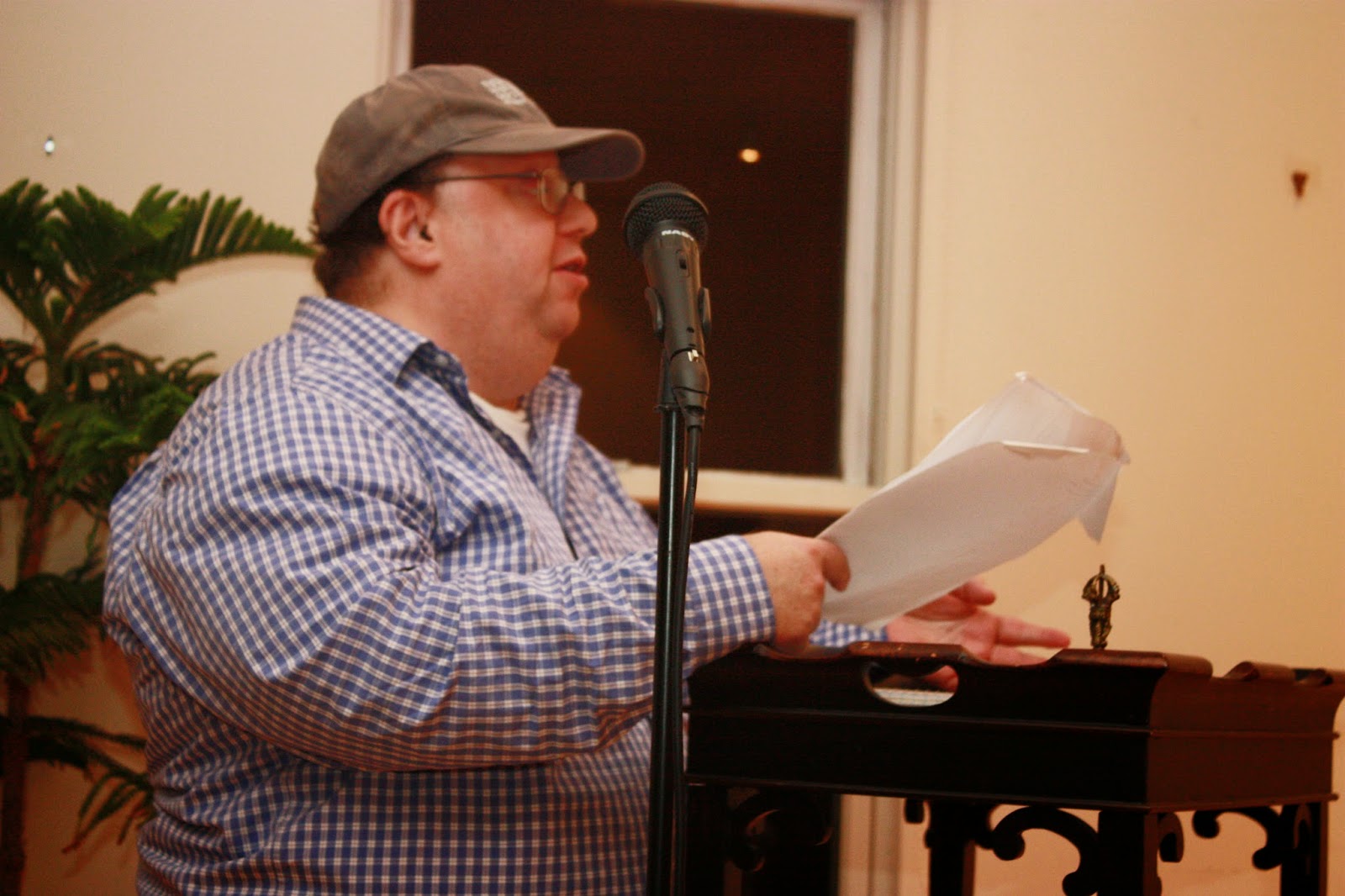 Don Levy is known to his FaceBook Friends as having a, shall we say, rich, detailed life on FB, so his funny poem “Life Without FaceBook” becomes quite hysterical in context, then he read a stream-of-consciousness “Googling Rain Poems.” Frank Robinson has been piling up poetic “firsts” all week: 1st time reading at Caffè Lena on Wednesday night, 1st time “solo flight” here without his wife Thérèse at a poetry reading, with 2 interesting poems, “When I Was a Kid America Was Like Africa” & “Ce n’est pas un poème.” Mark W. O’Brien first read a poem by W.W. Christman (1865 - 1937) then one by an Irish poet Gene Barry, & on into a long introduction that could have been a long poem in itself before he read the poem itself "I've Heard the Beautiful Message."  Dennis Sulllivan, on the other hand, read only one poem, a characteristically philosophical piece, “Are You Sitting Alone Tonight?” inspired by the Woody Allen flick, “Broadway Danny Rose.”

Joe Krausman & I were the featured poets. I had met Joe when I moved back to this area in the late 1980’s when we were in a poetry workshop with the Poet Laureate of All Ireland, John Montague, & would often meet on the way as we walked to work each morning for the State of New York. I began with a poem about meeting Joe one morning on a street corner as he read the The New York Times, & we went on from there with poems about Death & Love, done as an interlocking set, weaving our poems in & out of each other's, a technique I had learned from performing with the poetry performance group 3 Guys from Albany. Joe is a constant presence in the poetry scene as well as the literary/art scene in general here in the Capital District — not to mention a great friend. We had a lot of fun bouncing our poems off each other. 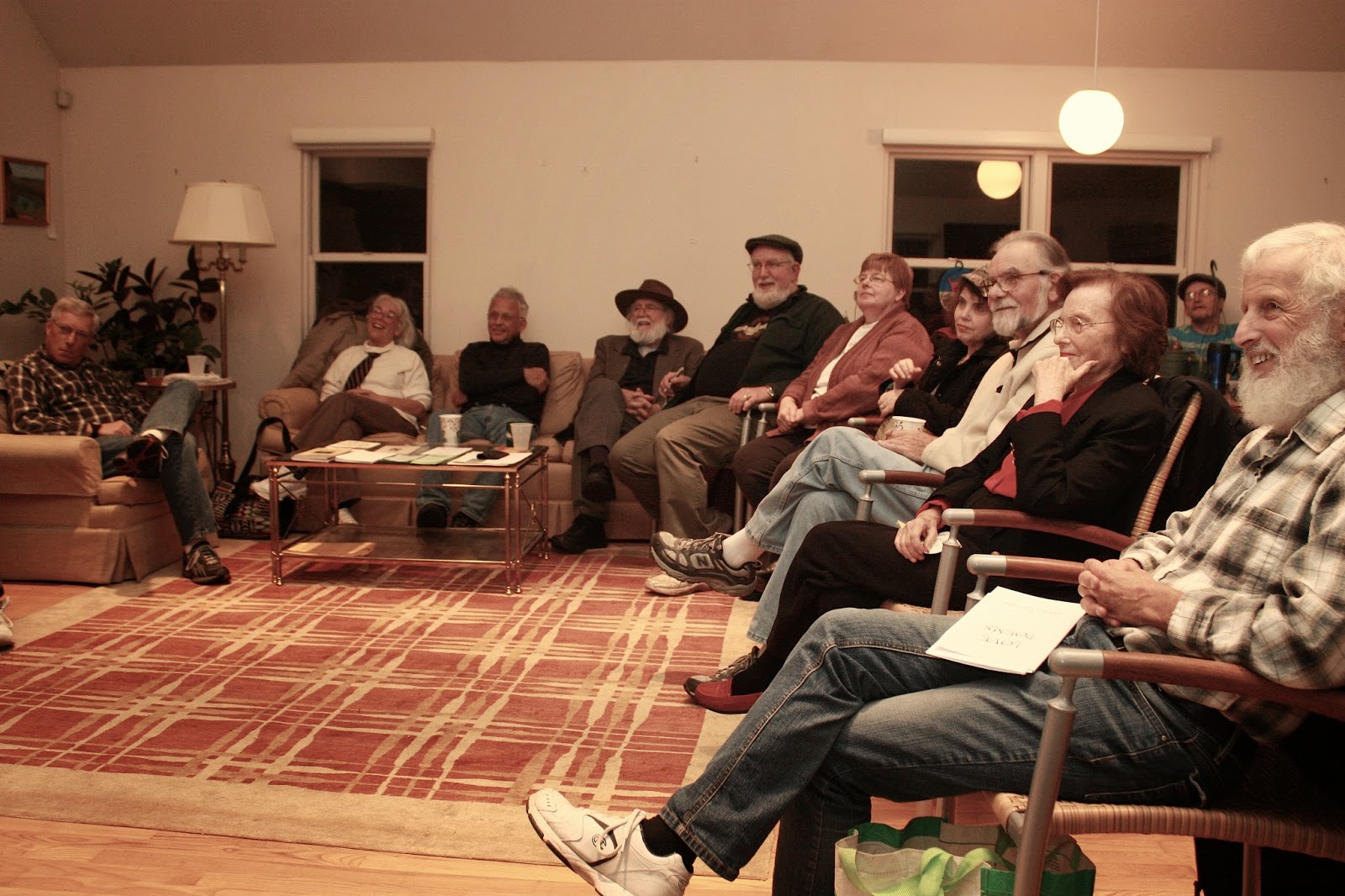 After a break our host Alan Casline returned with a piece about a leaf falling inspired by “Michael McClure Line I Find Climbing 10 Mountains.” Adam Wells was a new poet here who eschewed the mic to do 2 pieces from memory in hip-hop rhythms & rhymes, “Turkey” & “Perfect for Me.” Howard Kogan’s poem was too late for either Joe or me, titled “Advice to Poets” it contained such gems as “we have to become musicians…” & “never use the word ’Truth,’ or ‘Love’ either.” Tom Corrado proclaimed it “a great night for a screen dump” & read #138. Edie Abrams' poem described “10 Days in Utah.” Susan Riback read what she called an “inner song” “The Good Place to Be,” then a piece on internet dating. Barbara Garro was “an Arboretum virgin” & read “The Curio Cabinet” that went from the figurines inside to animal myths. Megan Gillespie ended the night with a poem about talking to her neighbor in the backyard titled “Insulin Shock” & we hope to see her at more open mics soon.

This was the final reading in the series until the Spring. But the Arboretum is still there throughout the Winter (trees don’t migrate very quickly, you know). Watch for more readings here sometime in April, 2015.
Posted by DWx at 2:22 PM