Paul Pines has been filling up my bookshelves. At last count I have copies of 10 of his books, which doesn’t count my old copy of the original paperback of the novel The Tin Angel that I gave away. His most recent collection is Fishing On the Pole Star (Dos Madres Press, 2014). I even have a copy of his 1972 Onion (with drawings by Basil King) (Mulch Press). In addition to his poetry & being a practicing psychotherapist he runs the annual Lake George Jazz Weekend. Today the Friends of the Albany Public Library honored him for his literary work & contributions to the larger arts community with a lunch at the University Club, then Paul gave a lecture at the Albany Public Library Main Branch. 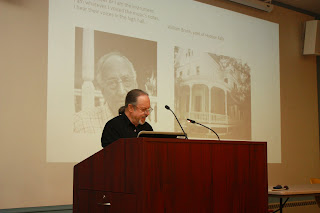 Titled “Voco, Vocatus — Who Calls? Tracking the Voice & the Vision” the presentation was about the sources & nature of the poetic imagination. He began with reading a couple of poems from his Divine Madness (March Hawk Press, 2012), one about Vulcan, the other about Citizen Tom Paine. From there to images projected on the screen behind him by painters Joan Mitchell, Mike Goldberg, Larry Rivers & Robert Indiana who had been patrons (as I had) in Paul’s bar The Tin Palace at the corner of Bowery & 2nd St. in NYC. On to a discussion of the work of upstate poet William Bronk, some poems from Paul’s New Orleans Variations & Paris Ourobouros (Dos Madres Press, 2013), to the Popl Vuh & the “submerged center,” to Rimbaud, Plato from the Phaedrus on divine madness, the poet as visionary with reference to Blake, Black Elk & Walt Whitman. On to Wolfgang Pauli, finishing with a discussion of an essay by Thomas de Zengotita, “Naming of the American Mind, Culture as Anesthetic.” Phew, a whirlwind of references, enough for a semester of study at the University of the Self.