at the Social Justice Center. A lovely summer evening with poets & audience gathering early for the open mic & eventual arrival of the featured poet, Mojavi. But to start us off I invoked the Muse of the late poet/activist/fiction writer Grace Paley.

Hard-core regular, Sylvia Barnard, started us off with "Ballet on a Summer Afternoon" from a visit to the New York Ballet at SPAC. Joe Krausman's poem was titled, & about, "Marilyn Monroe's Dress" ($1.3 million) & what are things worth? The first of the night's SJC first-timers was George, with a philosophical poem about success & beauty & love. He was followed by another first-timer, Maria, with her poem "Perceptions," both physical & emotional. 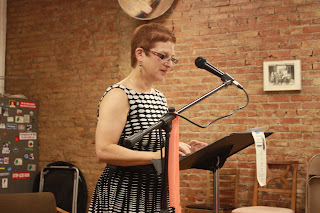 If Joan Goodman had read here previously, it was a long time ago; her apocalyptic poem began with wondering "What if I never make a thing?" which just might be the title, & ended with chocolate cake & touch. Don Levy's poem "Cabbies" came about from a conversation with Carolee about their respective rides. Kim Henry was back again after a too-long absence with an emotional reading of a poem, "August 13," about the anniversary of the death of her father. 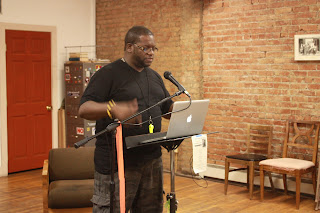 The featured poet was Mojavi, organizer of the Urban Guerilla Theater, force behind the Nitty Gritty Slam, & now coach of the Slam team. As an introduction he told an anecdote about showing me one of his poems a number of years ago, to which my reaction was it was "alright." But I must say since then his poems have by & large gotten much, much better, a small sample of which he shared with us tonight, beginning with a new powerful piece (he read it Monday at Saint Poem) about a sexually-abused interracial child. Then on to a love poem beginning "I can tell you about heartbreak," & one of my favorites the urban portrait, "Around My Block…" then another love poem, from memory. For his last poem he chased his son & a few other "kids" outside so he could delve into the explicit sex of the poem "She Was More than a Piece of Ass."

After a short break we were back with more open mic poets, including me, with a portrait poem from my January Florida vacation, "Veranda Delray." Shannon Shoemaker's brand new piece also required the youngsters to leave, "A True Story, or You Fucked the Drunk Out of Me," the kind of poem that cries out for a post-coital cigarette. Avery's poem from memory, "From Me to You," was like a TV sales promotion for Smiles. Emily Gonzalez repeated the luscious, multi-lingual picture of her mother cooking, dreaming of her home in Puerto Rico.

The 1-poem rule kept the night moving along so it wasn't that late when we all headed home, or wherever else we were going. Every third Thursday at the SJC, 33 Central Ave., Albany, NY, 7:30PM, a $3.00 donation supports poetry & the work of the SJC.
Posted by DWx at 3:10 PM