Or more accurately, half of Love Jones, since I bailed out at the break (end of a long night), at Rudy's Restaurant in Rensselaer, presented by The Collective. Bless served as host with the lovely Shelly doing trivia contests between the performers. Nickey Negrito served as DJ. 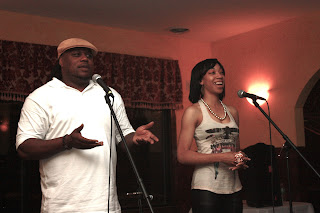 It was apparently an open mic, but one without a sign-up sheet, Bless asking for volunteers, or in some cases, commanding volunteers to come forth. So he set the tone with a piece "Gettin' to the Flow," playing on those wonderful "--ooh" sounds. He was followed by one of the fancier dressers (he had a nice hat) who read a "joint venting" piece from his cellphone. Kevin Peterson also vented, about alternate side of the street parking, practicing his piece from memory to take on the road with the Slam team.

Of course when the trivia questions started flying, especially about hip-hop stars & songs, I just had to sit on my (white) hands. Poetic Visionz was up with inspirational advice deconstructing words & phrases to find the positive tucked inside. He was followed by "Puddin'" (David Hulet?) with a free-flowing string of comedic commentary on just about anything that popped into his head.

Bless returned with what he calls his "sober piece," definitely one of his masterpieces, "Jazz Music," inspirational without preaching, I like it everytime I hear it. Then he called me up & I pulled out the old hot summer poem, "Park Fantasy" & then the more recent love poem, "Morning Key."

At that point they took a break, I hung around a bit, but the night began to creep up on me so I missed the second half. Maybe next time I'll plan better & make it through the night (sounds like what I tell the women). The Collective has had some exciting programs in various venues in the Capital Region, promoted on FaceBook & otherwise in the community. Look for them again, if not at Rudy's, then somewhere.
Posted by DWx at 12:44 PM