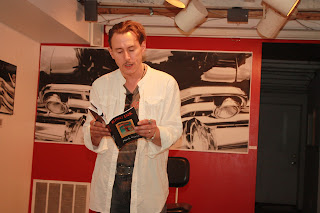 Our host, R.M. Engelhardt started off the open mic with a reading from the poetry of singer Nick Cave, from his book King Ink. Then on to the rest of us open mic poets.

I was first up with recent pieces, the salacious "Hemingway" & the cosmic "The Transit of Venus." L-Majesty did 2 pieces, "False Advertising" & "Black Men Have Become the Enemy" both sociological expositions with a message for us all. R.M. Engelhardt's own poems were about Poetry: "Addiction," "The Reckoning," & a "satirical" poem about Slam poetry, "A Difference of Opinion" (he doesn't like it). Poetyc Visionz (who is a member of Albany's Slam team) began with a recent piece on race, "I Am Not Black," then a shorter piece, "Be Courage."

Ford McClain's poem, "Paint Brush," just written today, was about his paintings that will be in an up-coming show at the Romaine Brooks Gallery on Hudson Ave. & could serve as his Artist's Statement. Mojavi, coach of the Albany Slam team, had trouble finding which smart-phone had his poem on, then found it, a new piece he's working on about a sexually abused inter-racial child, then countered that with a love poem.

Our host returned with 2 more poems about poetry, "In the Blood" & "The Poet," the grand theme for the night.

Poetry sure is holy at Saint Poem (for a while there I thought I was at church with all the preaching going on), every 3rd Monday at the UAG Gallery on Lark St., about 8PM (or later), an open mic for us Poets & poets. Donation helps support the UAG Gallery.
Posted by DWx at 11:26 PM