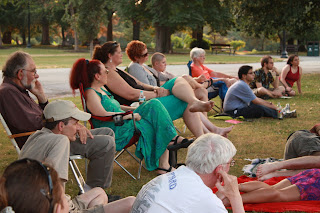 This was a booking I've wanted to do for years, at least since Don Levy once complained to me that he got an email from someone thinking he was Donald Lev. What genius, I thought, to have on the same program sometime the poets Donald Lev & Don Levy. So I had my chance this year for Poets in the Park. Donald Lev has been promoting his new book of poetry A Very Funny Fellow (NYQ Books) & one can always enjoy an evening of Don Levy's nostalgic gay humor. So here we were in Washington Park on another fine Summer evening, with listeners from as far away as Maine! -- & as close as Willett St. 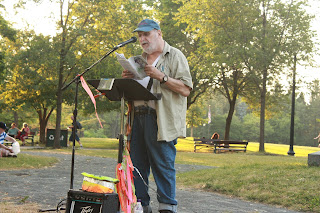 Donald Lev read mostly from A Very Funny Fellow, wry, sometimes "funny" but always poignant. I had interviewed Donald & his partner Enid Dame back in the late 1990s on The Poetry Motel cable TV show, but had actually first heard him (& Enid) read in the late-1970s in the NYC poetry scene. His poems this evening included what sounded like dream poems, poems set in a bar he frequents in New Paltz while doing his laundry ("The Long and Short of It," "The Smaller Television"), movies ("To Embrace It"), even poems making fun of poetry & his role as a poet ("Poem on a Nice Sunny Afternoon," "Titanic," "A Wind Was Blowing"), sprinkled throughout with humor. He ended with a cluster of new poems, ranging from "A Landscape" ("…wretched…"), to the bones of Amelia Earhart ("Momento Mori"), ending with a vision of "goddesses bathing" in "Summer Poem." 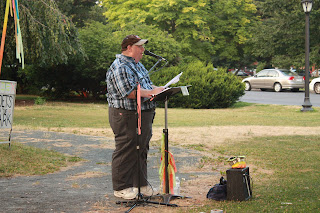 I've known (& been a friend of) Don Levy since the early days of the QE2 open mic & worked with him on publicizing his reading series at the former Albany Art Gallery on Jefferson St. back in the early1990s, & editing Open Mic: the Albany Anthology. He has been featured here in the Park back in 1991 & 1997. Don said his poems this evening would be "pretty new", moving from darker to lighter, but you knew he would make you laugh too. He began with a couple of high-school memoir pieces dealing with bullying & being an outcast & continued with a tender memoir of his father, "The Mysteries of Barbecue." The next few poems took on the issue of being gay more directly. "This is the Way the Cookie Ad Crumbles" is a political commentary on some of the responses to the "rainbow" Oreo cookie. He returned to his memoirs of childhood with a poem about his fear of the movie The Wizard of Oz in "A Friend of Dorothy's. Don is notorious for his "gay-fantasy poems" & "Poem for Cowboy Josh" continues that hilarious genre, from an episode on the Food Network. He ended with a tender tribute to the founder of Poets in the Park in his poem "The Annual Tom Nattell Beret Toss."

It was another fine night of pleasant weather & entertaining poetry from 2 of the Region's finest poets. The series continues on Saturday evenings in July in Washington Park, Albany, NY, at 7PM. Bring chairs or blankets to sit on.
Posted by DWx at 1:48 PM