Poets in the Park, July 7

The first of this year's series (which has been happening in Washington Park in Albany, NY since 1989) began with 2 very different poets, Adrianna Delgado & Howard Kogan. It was a lovely summer evening under the trees around the Robert Burns statue with old poetry friends, new fans, even a couple of (well-behaved) kids (future poets of America?). 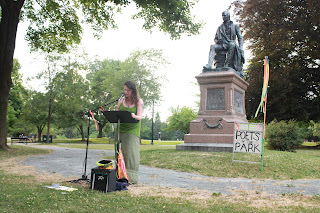 Adrianna Delgado is a fixture in the mid-Hudson poetry scene as a host of readings & a frequenter of open mics, which is where I heard her work that tonight served a splendid contrast to work of Howard Kogan. She began with a a fitting introduction to her her own emotionally over-wrought romantic poetry, "Blood Jet," a Cento composed of lines from Sylvia Plath's poetry, then to "Draft me a Space in your Harbor," a love poem just finished tonight on her blanket here in Washington Park. From then on it was pretty much the same through poems about love/sex, word play, physics, St. Joan, even blood & menstruation. She read without introductions, the poems blending into a breathless (she even used that word in one poem) tapestry of a romantic poetic soul sighing into the night. 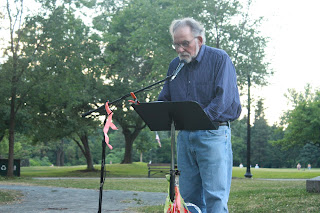 Howard Kogan was the 2011 Poet Laureate of Smith's Tavern (Voorheesville) & is the author of a book of poems, Indian Summer (Square Circle Press, 2011). He read a few poems from his book, notably the tender & humorous "On Reading Poe Late at Night," then on to a nice mix of mostly longer poems, characteristically philosophical & conversational, touched with gentle humor. One of his effective devices is to ponder the making of the poem in the poem, as in the generational confrontation in "CD Launch" & the dream-like "Imagination." Also reflections on family & generations is a major theme he explores, which is certainly not "kvetching about nothing…" 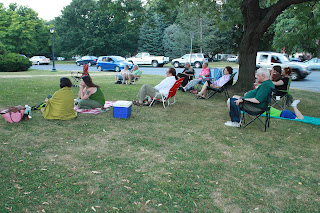 One of the joys of reading in the Park is the swirl of the world around us; life doesn't stop for Poetry (or any Art). Over the years poets have been interrupted (or not) by fire engines, ambulances, drive-by heckling, even the arrest of a run-a-way mental patient. Tonight someone drove by & screamed loudly about 2 seconds before Adrianna said the word "distractions" & Howard was briefly interrupted by the passing of the Aquaducks tour, then at the end his poems were punctuated by snippets from the Park Playhouse production of "Cabaret."

Join us the Saturdays in July at 7PM at the Robert Burns statue in Washington Park in Albany.
Posted by DWx at 6:19 PM