The Story of Albany with Paul Grondahl, April 14

The Colonie Library (otherwise known as the William K. Sanford Town Library) offers a Noon Book Talk on Thursdays at 12:15. Today the speaker was Paul Grondahl, writer for the Albany Times-Union, & also the biographer of former Albany mayor Erastus Corning. 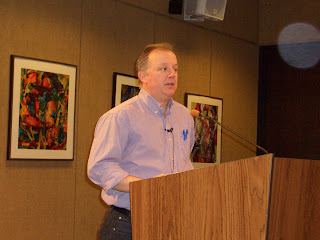 Paul spoke today about the Times-Union project The Story of Albany, both as a book & a presence on the T-U website (more about that below), in which the people of Albany were asked to submit their memories of living & growing up in Albany, memoirs of the sights, sounds, personalities, whatever. I have an entry in the book, a story & photo about poetry readings in Albany & Tom Nattell.

After reading the introduction, Paul read a selection of pieces on election night bonfires in the South End, about growing up on State St., & on Elm St., on Depression-era sights & sounds. He paused after each selection to ask the audience about their recollections & at the end responded to a variety of questions about newspaper work, his training as a reporter, the state of the newspaper industry today, & his writing. Paul is a relaxed speaker with a warm, friendly manner & I've always enjoyed his talks about his books, just as I always read stories in the T-U with his by-line.

The sale of the book The Story of Albany ($25.00) is used to benefit the Times Union Hope Fund which pays for disadvantaged youth to attend after-school programs and summer camps. However, anytime I've tried to find the website listed in the book & on print publicity, timesunion.com/storyofalbany, I get a "site not found" message. The webmaster has written to me that they are looking into it.  I'll post an update when I hear from them.
Posted by DWx at 9:07 PM

Here try this link for the Hope Fund
http://www.timesunion.com/hopefund

or you can search the T-U website for:
"Story of Albany" (in quotes)

Along the left side you'll see a link for Paul and his associated stories.