Live from the Living Room, April 13

Don Levy hosts this poetry reading, with an open mic, on the second Wednesday at Albany's Pride Center. This month was the re-scheduled (due to Winter's earlier wrath) reading of the local poet & Blogster (is that a word yet?) Carolee Sherwood. 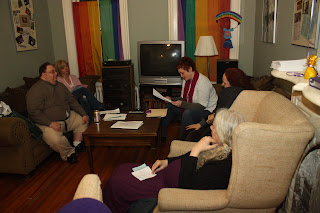 Carolee, in addition to the web work she does for the HVWG, is also one of the principles behind Big Tent Poetry & her poems are posted daily on her Blog. She has been doing the "poem-a-day" thing for National Poetry Month so she read a cluster of these poems. "Brothel Early Morning" verged on narrative, with feathers & a stiletto. Others included "Raccoon" & "You Don't Feel Like Yourself When Dead," & "Backwards Morning" also prompted by prompts.  In "Comic Book Hero" she played off the prompt about having superpowers & "Next Time Tahiti" was prompted by to write "a never-again poem."  But my favorite in the group was "Nearly Barely" where she plays on changing letters of words to make them into something else (isn't this what poets do all the time?). Her last quartet of poems weren't from the monthly prompts, included the found-poem, "I Think I'll Go Make a Video about Ivan the Terrible" (based on Twitter postings), & the "FaceBook poem" about thinking she sees the poet Dorianne Laux, "Dining Along: Why I Smiled to Myself." With WordFest this weekend, she read a poem about last year's event, then ended with "To Girls Who Smiled as a Way to Survive in the World." A relaxed, sometimes humorous reading, well put together.

This is always an intimate gathering, poets reading from their comfy chairs, often engaging in conversation after poems or between poets. Sylvia Barnard talked about a friend who died recently that she had met at Cambridge, England many years ago, & the poem Sylvia read was as much about Cambridge & the past as about her friend. Tess Lecuyer read from a series of poems she has written about working for the fading bookstore chain, Borders, first a sonnet, "Shaking the Chai," then a poem from 1996, "Fall Equinox: Norman, Oklahoma" (which engendered talk about Oklahoma).

Don Levy described the next poet, Jill Crammond, as "the Robin to Carolee's Batman," then a discussion ensued as to which was which. Her first poem she described as "a schmaltzy love poem" "Lovers as an Abstract Art" then she read "I Am the Magician's Assistant" (isn't that sort of like Robin?). Back to the topic of Oklahoma, I read my recent poem "Oklahoma Sunday" then a poem actually written to a prompt recently on Big Tent Poetry "How to Read a Poem." 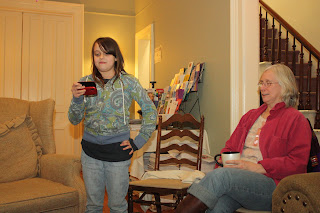 The youngest performer was Nina (here with her Grandma Sue Cerniglia, who had forgotten her own poem). Nina went into a short introductory rant about being hit with a ball while playing sports in school then read from her smart-phone a funny poem "Being Sick." Don Levy brought up the rear with another of his QE2-era memories, this about a reading at the Boulevard Bookstore, "Tom Gogola Naked" (note correct spelling of Tom's name).

Every 2nd Wednesday at the Pride Center of the Capital Region, Hudson Ave., Albany, between Lark & Dove. Comfy & straight-friendly.
Posted by DWx at 2:36 PM