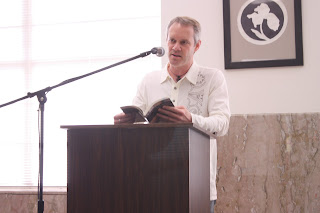 The power of words continued today, & I opted for first reading in the North Lounge (oh the tyranny of choices). Nathan Brown was up first with selections from his prose memoir of his friend & fellow poet Jim Chastain, Letters to a One-Armed Poet: A Memoir of Friendship, Loss, and Butternut Squash. The pieces are set in the form of letters to his late friend, stories of poetry buddies on the road. The section he read about eating his way through Jim's poem "The Last Supper" (or was it lost supper), was funny, poetic, & touching. Again, great prose from the pen (fingers) of a poet.

James Brubaker read from a longer prose piece set up like an interview with a fictional band member being interviewed about the experimental jazz saxophonist Albert Ayler, but without the questions. Ayler died in 1970, presumably a suicide, while the character interviewed claims, "God killed Albert Ayler." 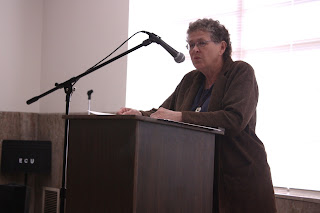 Sarah Webb took us on a different turn, with poetry of a decidedly Buddhist bent, or as she said, "something sparkly at the base of the mind." While she included a poem based on a Zen story, "Will It Go Too," other poems dealt with more everyday (if there can be such a thing in poetry) events, like driving on the highway between Texas & Oklahoma. A particularly ironic, & ultimately tender, piece, "Sundays" was about her daughter becoming a Baptist & having to drive her to church each week.

The second morning session I attended was also in the North Lounge & this time the choice was made for me. Patrick Ocampo was the first reader, another of the festival's readers who had live in NY, in Schenectady no less! He expressed an uncertainty about doing political poems (I make no such apology), but his poem "Sounds of the State" (in the anthology Ain't Nobody That Can Sing Like Me) is fine example of how to do it. His final poem was "Last Poem Kills Audience," but fortunately that didn't happen. 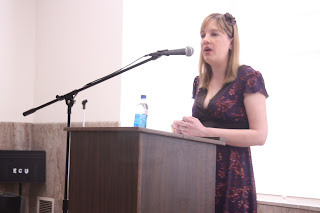 Tara Hembrough read an excerpt from her novel, Cold Sunshine, this chapter about young love & breaking a Christmas horse.

I was the third reader in this cluster, & like I said, I make no apologies for reading "political" poems so jumped right in with "Richard Nixon Must Die" & included "Baghdad/Albany" at the end. In between, the Coyote poems, "Physics" (for Japan), even some love poems. Oh my, so many great poets in the audience!

A quick lunch with Larry Thomas, Elizabeth Raby & her husband Jim, & Alan Barecka, then back for more poetry, this time in the Estep Auditorium.

Dean Rader read from his book, Work & Days (just like, sort of, Hesiod). He read a number of what he called his version of love poems, such as "A Genealogy of Love Poems" in 4 parts each a different genre of poetry with blanks, like Mad Libs. Also a love poem about Frog & Toad in a Petrarchean sonnet, "Frog Seeks Help With Anger Management". He read a couple of Oklahoma poems, including the dust-bowl "Hesiod & Oklahoma 1934" & ended with "The Poem You Ordered." Clever work with lots of wry humor. 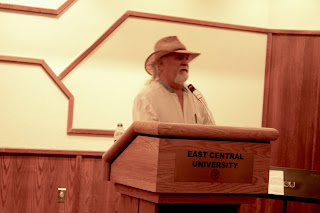 I had met Ron Wallace last year at the kick-off poetry reading for the Oklahoma LaborFest & he was instrumental in setting up 3 Guys from Albany in Albany, Oklahoma.  He began by describing how he came to write the "Oklahoma Cantos," pictures of Oklahoma landscape in quatrains (a selection appears in the anthology). The poem, "Learning to Speak Choctaw" was a memoir of his father who was a police officer & a veteran in the town. He ended with some "places & dates poems:" one about Mickey Mantle & a couple about his mother.

Fortunately, I had saved my seat in the front row (to take pictures) during the break because the house filled up for the festival finale, the reading by Billie Letts, author of the novel Where the Heart Is. 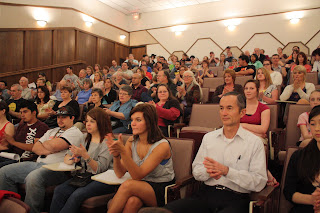 But first Mark Walling made the presentation of awards to high school students who were winners for the short fiction part of The Darryl Fisher High School Creative Writing Contest. He was followed by Joshua Grasso who presented the awards for poetry.  A full list of winners is here. 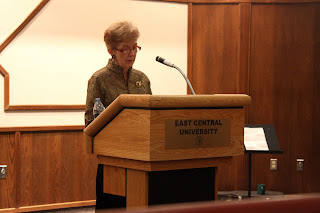 Billie Letts, a former school teacher, published her first novel at age 54, but had written screenplays & short before that. She had the audience in stitches telling us about when she was on the Oprah Winfrey show & Oprah mistook her for a Wal-mart employee where the segment was being taped. She read a section from Where the Heart Is, then more hilarious stories. She also gave out copies of her books that she had mis-inscribed at book signings, if that was your name or you knew someone with that name, e.g., "Cheryll."  A thoroughly delightful way to end a thoroughly marvelous festival. I was so proud & thrilled to be part of it.

Thank you Ken Hada & others at East Central University for all the good work you are doing. Keep at it.

You can check out an extensive selection of photos from the festival on my Flickr! site & other photos & information about the festival on the Scissortail Blog.
Posted by DWx at 1:38 PM