Compass: A Chapbook in Film, October 23 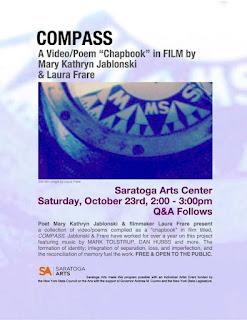 This was the premier screening of a collaborative project between poet Mary Kathryn Jablonski & filmmaker Laura Frare, at the Saratoga Arts Center. The project was funded by the New York State Council on the Arts, & had originally been scheduled to be screened at the Saratoga Springs Public Library, but has been cancelled three times due to the COVID-19 pandemic restrictions, until Saratoga Arts opened up their space for this event.

I have known both these artists for many years. Laura Frare did the cover art for my 1st book, Meditations of a Survivor (A.P.D., 1991), & I published Mary Kathryn Jablonski’s book of poems To the Husband I Have Not Yet Met (A.P.D., 2008). I have also seen some of their prior video poems at the Hyde Collection, & at the University at Albany Art Gallery.

Compass: A Chapbook in Film consists of 9 short pieces, poems read (or sung) by Jablonski, at times accompanied by traditional &/or original music. Local musicians Mark Tolstrup & Dan Hubbs provided some of the musical backing. The run time is about 35 minutes, but viewing it seemed outside time. As one audience members commented, “it was a transcendental experience.” The combination of the often dreamy videos, bending & twisting images of birds in trees, or wandering in a cemetery, the tide washing over sand, with the words of the poet spoken quietly, & the music, sometimes familiar, sometimes new, had me drifting. While I’m glad to not have the text of the poems to distract me, the experience begs to be repeated. There is in the piece titled “So Many Mothers” an almost abstract image of a close-up of a sewing machine (this filmed by Jablonski) that I realized with a shock was actually run in reverse, the machine un-sewing, so to speak. In “Two Roads/One Road” the image is of driving on a deserted country road, but without seeing the vehicle, so that it was like what we see sometimes in a dream, an empty road twisting & turning, going where? We don’t know.

The theme of Compass is, in the broadest terms, death, the reminder of mortality, as some of the titles suggest (“Flowers named for our dead,” “All Souls,” “Death in Winter”) but more specifically that of a close relative, a brother. One could say that death is all around us until it touches us directly. Five of the poems in the film have been published in Tupelo Quarterly or Atticus Review. But reading them, as masterful as they are in print, is not the experience of seeing the film, where all the elements — words, images, music, sound effects — blend & circle around each other, evoking that “transcendence.”

One can hope that Compass, A Chapbook in Film, will be shown in other venues, perhaps even at the Saratoga Springs Public Library as originally planned, in other libraries in the Region, or other arts/entertainment venues. I certainly would love to see it again.