A nice bunch/club of regulars “here” in Bennington, VT courtesy of Zoom, with our veteran host of open mics from Chicago & East, Charlie Rossiter. The rule here is 2 poems, not always obeyed, one in each round.

In the absence of an actual sign-up list on an actual clipboard Charlie asks for volunteers, so I ended up first; this is the season of baseball playoffs, & the World Series, so I read 2 baseball poems, “October Land” which is a pastiche based on T.S. Eliot’s “The Waste Land;” then in the 2nd round a poem, based on a chant by Frederico Garcia Lorca, that has little to do with baseball except I mention the Chicago White Sox, “I’m Going to Chicago.” 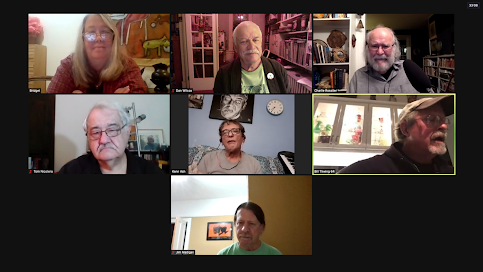 Jim Madigan dials in from Charlie’s former town of Oak Park, IL, a suburb of Chicago, with a different take on Homer (which Jim noted is a baseball term), “Odysseus & the Sirens;” in round 2, sticking with the baseball theme, he read one titled “America’s Favorite Pastime” with a history of Cubs baseball.

Kenn Ash began with meandering poetic words on time, then squeezed in a 2nd one; then in round 2 another poetic meandering by someone else & a song he wrote, “I just had fight with my head …” on using a prescription for someone else.

Bridget’s piece was “trying out words” in a wintery sky, with a murder of crows; in the 2nd round, “a little sketch” which was indeed very short.

Bill Thwing in his first round read from from one of my favorite books of ancient Chinese poetry, The Collected Songs of Cold Mountain, translated by Red Pine, Han Shan’s poem #100 pondering life & death, then reads his own 5 haiku; in round 2 he brought out his guitar to sing an anti-Trump song on COVID-19, oxycontin, etc, “A Ride on a Hurricane.”

Our host, Charlie Rossiter, read from from his 2007 book, The Night We Danced with the Raelettes (Foothills Publishing), “Defiantly Undeclared” a poem from his college days; in his 2nd go around another poem from his past, this a descriptive piece about  a character on the beach in Vancouver carving Totem poles, “People Have to Live.”

Tom Nicotera read seasonal poems in both rounds, in the 1st a ghost poem “Green Lady Burlington CT;” in the 2nd, a Halloween poem titled “A Clove of Garlic,” from his experience of working at the School of the Deaf.

Always an interesting night of poetry “in Bennington” on Zoom on the 2nd Tuesday of each month. If you are not on Charlie’s preferred list, send him an email at charliemrossiter@gmail.com & he’ll send you the link. I hope to see you there.