The mushrooms keep growing, the poems keep being written, & the poets keep showing up for the open mic. & Nancy Klepsch & I keep on being the co-hosts.

First on the open mic list was Rhonda Rosenheck, who read one of her “crime” poems as she did last month, sounding more like a “revenge poem,” in rhyme with Biblical references “Hoarding Death,” then an old, untitled poem she recently uncovered. Cheryl A. Rice made the drive up from Kingston with her partner Michael, her first poem, according to my less-than-adequate notes, was about “fish — as fish?” then a love poem about when she met Michael years ago during one of the Albany Word Fests, “Morning Has a Life of Its Own.”

Our host here in Collar City Mushrooms, Avery Stempel, read a poem titled “A Single Crow” that he intends to paint in an upcoming workshop here, then a poem just written, “Thursday,” about all the things not done when Thursday comes around again.  Sue Oringel was glad to be back out at an IPR (in-person reading), read “Dirt” an ode, then a pantoum playing on the differences/inferences of “May Day.” Joel Best read only one piece, an intricate word-mix about forgetting titled “Last in Series.” 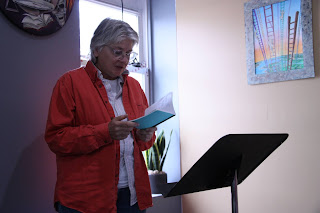 Tina Mazula returned, said she was reading some random notebook jottings from thinking about writing, then stopped to read a more finished piece, “Words,” a list poem of modifiers to the word “word,” then returned to her original jottings. My co-host Nancy Klepsch began with a draft rant about “America …” sounding a lot like Allen Ginsberg’s poem of that title, then one about art (& the lack of renumeration), based on a Fran Leibowitz bon mot “Artifice, or they Clap for the Money.” & I followed with a Halloween piece “Zombie Gourd,” then a short riff on “Troy.”

Julie Lomoe read a couple of seasonal pieces, an eco-poem titled “Abnormal Autumn,” & one about scaring away the neighborhood kids “Halloween Crone.” Therese Broderick began with a descriptive piece about “Rest Stop Near Exit 34,” then one titled “Gatha for the Cat.” Tim Verhaegen joined us this month with a tender piece about a conversation with his long-term boyfriend just before he died “My Bones,” then an effusive celebration of football “Heroes.”

Laura Ellzey drove over from Vermont & brought with her a couple of her “calligraphy poems,” Dumpster Kitten” written for her mother’s cat, & one written to tabulate how much of her life has been filled with poetry, “Poetry Entered In.” One could tell that Linda was the youngest poet on the sign-up sheet since she read her poems from her phone, the first about walking in the snow & thinking of depression, & another untitled one about her love of thunderstorms. 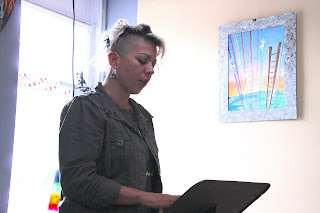 The poet who signed in as Za Za said that it has been 8 years since she read her poetry out, indeed I remember her from the early 2000s at open mics in Albany, she read an August poem “Tree Rat,” then a tender, nostalgic, untitled piece about not having any photos of her with a past lover. Naomi Bindman also made the trip from Vermont, began with a short poem, “Pendent,” inspired by Avery’s poem, then an excerpt titled “Circle of Healing,” mixing in images of her daughter’s childhood, her own hypnosis session, & her daughter’s fatal car accident in the rain, from a longer memoir.

Phew! a grand mix of styles, genres, moods, modes — the variety that makes community open mics so exhilarating. We gather here among the mushrooms at Collar City Mushrooms, 333 2nd Ave., Troy, NY, on the 2nd Sunday of each month at 2:00PM, open to the public, free (but donations appreciated for the mushroom themed snacks).