Reveling in his recent retirement from New York State service, Tim Verhaegen continues his well-attended Zoom poetry open mic, with folks attending from as far away as Northern Massachusetts (Howard Kogan) & Florida (Jan Tramontano).  He likes to do 2 rounds, which has become a popular format in  cyberspace.

Tim asked me to to go first & I began with a tribute to the workers of the beleaguered US Postal Service, “Going Postal.” For my 2nd poem I read “At the Silarian Cafe” which got me 3rd place in the New York State Fair Poetry Contest some years ago.


Howard Kogan’s “Poetry Contest,” about being a judge for the Hudson Valley Writers Guild, was a list of what’s in (etymology, piercings, Zombies, etc. ) & what’s out (sports, lust, falling in love, among others).  He read for his 2nd piece a poem on love & hate & old movies “I’m Afraid of Virginia Woolf.”

Jan Tramontano dealt with the lack of poetry venues down in Florida by Zooming in tonight, & read a poem titled “Hibiscus” (is that her husband Ron as the gardener?), then for the 2nd round “November Blues” responding to a study of the life habits of the longest living, & a reflection on her own life. 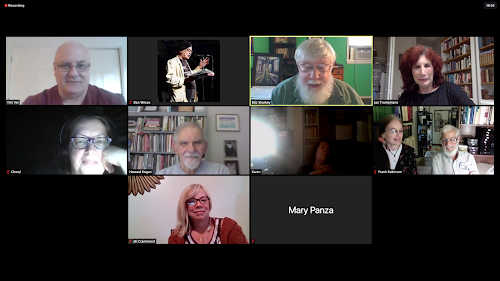 ys?).  His second poem was one of that growing genre of “COVID-19” poems, & inspired by a drawing by Kristen Day, “Aching for a Walk to the Far Side of the Brooklyn Bridge.”

In the 1st round Cheryl Rice read a poem titled “Amelia Earhart” then later “Peaches” with nostalgic  images from a trip to Georgia.

Our host, Tim Verhaegen, who has written a lot about his family read a descriptive piece about the red neck population in East Hampton & about his mother, while his second piece was also a memoir, this based on his experiences as a 20 year old gay man some time ago.

Therese Broderick received her inspiration for her poem “Taking My fill of August” by looking out her window at her back yard.  She opted not to read a 2nd piece in the next round but did remind us of her Facebook event every Tuesday in which she guides folks through the intricacies of writing a terzanelle (don’t ask me, follow her on Facebook & Twitter to find out).

Sharing the screen with Therese was her husband Frank Robinson who began with a fable about wanting nothing “Negative Capability,” then in the 2nd round returned to the same theme with a poem based on the Book of Ecclesiastes, which famously begins “Sheer futility: everything is futile.”

Jill Crammond’s poem in the 1st round, titled “Obituary for All That Scares Me” was set off by a hair in her mole.  Her 2nd poem was in that aforementioned COVID-19 genre, remembering the the lake & the woods, written when she couldn’t see he mother.

Karen Fabiane struggled with technical difficulties, including a text that was messed up, a light behind her that shown directly into the camera, but mostly with bad sound making her readings garbled & nearly inaudible, but then sometimes that happened too at the in-person poetry open mics in the old days.

Follow Tim on Facebook to find out when he will have his next Thursday open mic & Zoom in from anywhere on the planet.