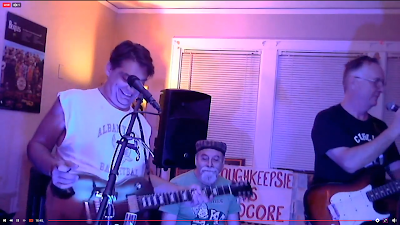 Nick Bisanz has become my Thursday fix in these days (or rather nights) of COVID-19. Each Thursday night at 7:45 the local musician & onetime poetry critic shows up on Facebook (Nick Bisanz Music) to play rock/pop etc. covers in his living room, usually with fellow local musician Geo Doody. Of late the electronic music rapper poet etc. Algorythm has been a guest, also poet/masseuse Mary Panza was a guest with a set of favorite poems, & even me — DWx — recently with my rock’n’roll themed poems. Most recently the guest was a newly bearded Steve Nover, on bongos, shakers & assorted percussion, even joining in on vocals. Of late techy Thom Francis has been working the sound & camera, which has improved their ratings over Thursday night TV, such as The Wall.

Sometimes I get there a tad late, since Tim Verhaegen has a popular Zoom open mic on some random Thursdays that starts at 7:00 but is usually over before 8:00PM. I don’t always know what Nick & Geo are playing, whose songs they’re covering — I’m still stuck in the punk hell of CBGBs, the QE2, cassettes, etc. — &, to be honest, sometimes even when it’s a song I know sometimes can’t recognize it in Nick/Geo’s version. Though they do a good version of “Maggie’s Farm.”

It’s permanently on my calendar. It’s informal, alcoholic, profane & mostly in tune. & you don’t have to wear pants, you can get drunk on your own, cheap booze & not have to drive home.