Albany poet, Therese Broderick, invited me on Facebook to this Zoom event from Amesbury, Massachusetts, hosted by the current Amesbury Poet Laureate, Ellie O’Leary. Who knew that this little town would have/need a Poet Laureate — a couple past Laureates were also in attendance at this event.

Therese Broderick, appearing as “Frank Robinson” in the accompanying screen print, read from a chapbook-in-progress, “Terzanelle - Poems Inspired by Tai Chi." She explained that this poetic form reminds her of movements in her Tai Chi practice & even demonstrated a series of such. She said that the form was invented by American poet & scholar of poetic forms Lewis Turco, that the Terzanelle is a 19-line form that is a combination of the Villanelle (5 3-line stanzas, 6th stanza 4 lines) with the Terza Rima invented by Dante Alighieri for the creation of the Divine Comedy (here is a glossary that contains information on poetic forms https://poets.org/glossary; this will give you information on the Terzanelle https://www.writersdigest.com/write-better-poetry/terzanelle-poetic-form).

Therese began by reading Turco’s poem “Passing the Time” about why he writes, then on to Terzanelles from her chapbook, on a variety of topics, “The Thorn Shrub,” “Drifters” (boats), a spinning  girl at a party next door “Dizzy,” a squashed caterpillar “Casual Kill.” Also her variation she called a “flash Terzanelle” in 4 small parts about a wind turbine. Others included “Lady Bug” (about her Bell’s Palsy), “400 Centuries Ago” that ponders the hairdressers of the past, “Relics” (about saving things from giving birth, her memories), “Taking My Fill of August,” & her most recent “Elegy for Ruth Bader Ginsburg.” She said that she doesn’t always stick to the strict 19-line limitation, creating her own expanding, flowing form with more emphasis on the Terza Rima rather than the Villanelle, much like the movements in Tai Chi. 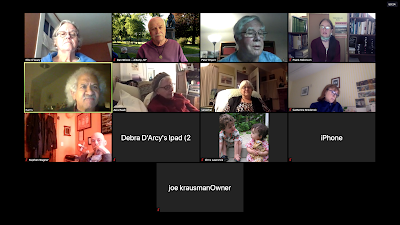 Her reading was followed by a Q&A session in which she talked more about the form & her open-ended variation. (As Turco created a unique form from 2 traditional forms & baptized it “Terzanelle” I would like to propose that Therese Broderick’s variation on Turco’s creation be re-named the “Theresezanelle,” it seems only right.

Then on to a brief open mic. The first poet, identified only as Harris, read an imaginative fantasy “The Day After My Death” based on a Billy Collins poem.

Peter Bryant read his own Terzanelle a poem about the tides, then another about hydroelectric dams, a political piece.

Lainie Senechal, a former Amesbury Poet Laureate, read a love poem to Autumn titled “The Nature of the Situation,” then another about Autumn, the light getting less outside, but the spirit finding more light.

There is an ongoing monthly open mic on the 4th Tuesday of the month originating from Amesbury on Zoom. Look for more information on the Facebook page https://www.facebook.com/EllieOLearypoetlaureateamesbury

Nice write up. Thank you.