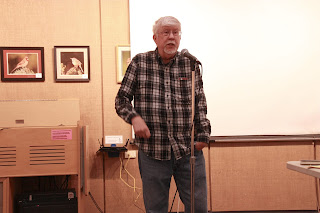 To kick-off the submission period for the 5th Annual Stephen A. DiBiase Poetry Contest organizer/poet Bob Sharkey put together a Sunday afternoon reading at the William K. Sanford Town Library in Loudonville. There were a couple of featured poets, readings by a variety of local poets, & a reading of select poems by international poets from this past year’s contest. Bob Sharkey was our affable host. He began with a poem by Maria Castro Dominguez from the Canary Islands, “Tambococha Puff.”

I led off the open mic list with a poem about the fire at Notre Dame Cathedral “Tourism.” Mark W. O’Brien read the Haibun “Shunpiker” from his new collection My Childhood Appropriated (FootHills Publishing, 2019). A new voice Shari Falkenheimer read a piece in rhyme about Spring & Judgment Day. Dianne Sefcik read the poem “Anasazi Valley” from her marvelous little book of photos & poems Utah: February 2019. 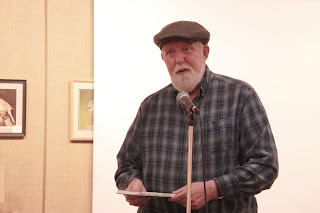 The first of the 2 special featured poets was Alan Casline who read from his hefty collection Summergreen (FootHills Publishing, 2019) the poems “Summergreen Vacation,” “Ode to a Slug,” “Amusement” (of slipping a poem into a conversation), “Avonomics,” “A Moment,” & “Mountain Song.” In between he also read one of the international entries to the 2019 DiBiase contest, “Dancing Tiger” by Fabiyas M V, Orumanayur, Kerala, India.

Back to the open mic, Bob read another international entry a stirring poem by Siddhi Kamble, from Mumbai, India, titled “Rise.” Mary Kathryn Jablonski read the ever-changing poem “Mare Frigoris” from her latest book, Sugar Maker Moon (Dos Madres Press, 2019). Joe Krausman read his poem “A Man on a Wire” (not for Philippe Petit, but for Bill Clinton). Dave DeVries, who hosts an open mic right here at the Colonie Town Library on the 2nd Tuesday of the month, read the quiet “Listen to Silence’s Psalm.” Cathy Smith read her evocative poem “Rhapsody in Blue at the Egg in Albany.” Betty Zerbst read “Cemetery” about planting bulbs for the Spring blooming. 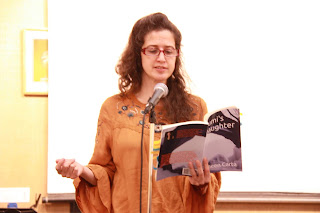 The other featured poet, Dineen Carta, was back in town for a visit & said she was pleased to be here to read among friends. She read from both her 1st book, Loving the Ache: A Woman’s Journey (2015) & from the new Rumi’s Granddaughter (2019). Many of the poems don’t have actual titles, with the first line serving as a title. Like the poems of Rumi many in both books are short, with short lines, like prayers, bits of spiritual comments, advice, exclamations of love, of wonder, along a spiritual path often filled with pain & loss as much as with joy. In the new book there is a section at the back of mostly blank pages with a single line at the top as if the poet were challenging the reader to write our own poems to finish out her book.

Although the open mic list was finished, Bob opened it up to anyone who wanted to read another poem, & Shari read a lighter piece “One Leg Up,” & Betty ended the afternoon with an annual poem in memory to a child lost at birth.

As I write this, the official announcement of the 5th Annual Stephen A. DiBiase Poetry Contest has gone out, deadline is January 15, 2020. You can find the complete rules, such as they are, here at the Hudson Valley Writers Guild website. It’s free — good luck!