The setting for this movable feast this date was the Local 217, a bar on Delaware Ave. in Albany. The host, Douglas Rothschild welcomed us in the back room, then introduced poet Kenny J.P. Garcia to introduce the night’s poets. 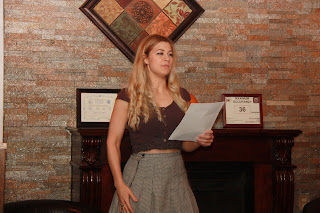 Lisa Mottolo is a writer from Schenectady who somehow has apparently avoided the myriad open mics in the area. She began with a piece titled “Fever Dreams” a descriptive narrative about attending a strip club. The other pieces, poetry &/or prose (impossible to know if there were line-breaks or where they were), ranged in topics from artist-friends, the color red, & a couple of eco-poems (“Bits of Green Remaining” & “The Birds Were Fools”). She ended where she began with “Fever Dream, Part 2” this time about an assault at the strip club.

The event was billed as having 3 readers, but one, Sandra Simonds, didn’t make the trip. However, gentlemanly Doug Rothschild read some of her poems, one titled “Night in the Insane Asylum of Plants,” like punk notebook entries, which mixed well with the background chatter & music from the bar, & a piece that sounded like a spin-off of Ginsberg “I Am a Terrible American.” The night suffered from not having Sandra here to read more & talk about her poems, she would've added a lot. 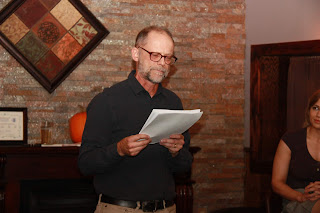 The final poet of the evening, Joe Elliot, had come up from NYC, but indicated he had hung out on Lark St. at some time in the past. He did a long set with clever poems filled with hipster-cynical humor, filled with “I”. There was a clever, descriptive piece about his shopping bag “The Two Fridas,” “Thank God for Laminated Books” which was either the title of the poem or a descriptive intro, even one poem he introduced by saying “this has a title but I don’t care for it so let’s go…” His last piece was a very long, repetitive poem titled “My Uncle’s Basement” in which there were multiple versions of the sighting & deaths of Osama bin Laden, funny in their juxtapositions, locations & methods of his death that were like a string of Saturday Night Live skits, one after the other, until I felt like saying “OK, I get it already,” & even the poet himself at one point commented “my god, that’s so stupid.”

It seems like this reading series, true to its patron saint, keeps getting dispossessed from one location to another. Look for it in a coffee shop, bar or laundromat somewhere in Albany (or elsewhere). Find its FaceBook page for details.
Posted by DWx at 4:41 PM

This article very useful and very nice. thanks for sharing good knowledge