Back to Schenectady for poetry at C.R.E.A.T.E. space, tonight with 2 featured poets from the mid-Hudson area, Mike Jurkovic & Ken Holland. Our host, Jackie Craven, got us off to a seasonal start with a poem by Brian Fanelli, “Raking Leaves.”

Alan Catlin began the open mic with 2 poems from a manuscript titled Asylum Garden After Van Gogh that has just been accepted by Dos Madres Press, “Remains Unsuitable for Viewing (after Charles Simic)” & “This is Not Art” based on war zone photographs. I followed with a poem I didn’t include in my reading this past Monday “Peace Marchers at the Viet Nam Memorial,” &, to bring a bit of levity back into the room, “Opinions.”

Susan Kress read the poem “Annunciations,” about being in Italy, remembering an earlier trip there & her mother pregnant. Susan Carol Jewell announced that, once again, she did not win the Rattle Magazine ekphrastic poetry contest, & then read 2 poems based on the same photograph, “The Case for Keeping Closed,” & a longer version from a different perspective “A Sound Case.” 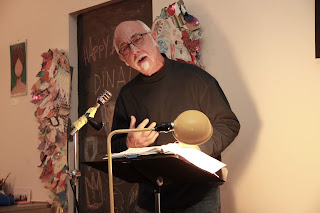 The first featured poet of the night was Mike Jurkovic who read mostly from a CD project he is working on with Albany musician Nick Bisanz, the CD titled American Mental. The poems are a grim view of dystopian Americana, based on real events & characters in the pseudonomous town of Shitlorn, cultural anthropology through the eyes of a cynic. “Marty is 81” is about a conversation while getting an oil change, “Can Man” was another portrait about an urban gleaner, “Cloud Land” was a commentary on Trump & “Wonderland Parade” was about the takeover of small-town America by retail chain stores. There was also a poem for his wife Emily, “Rude Impact,” another in the voice of a candy machine in an old theater, many others. He ended with a look back at the 1964 World’s Fair in Flushing, NY “The Ir-reverseable Future.” It seemed very grim, but then we do live here. I’m looking forward to hearing the music with the poetry on the CD. 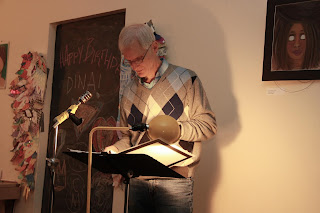 The other featured poet, Ken Holland, also read some poems about his confrontation with Americana, like & not like Mike Jurkovic’s. He began with a couple of childhood memoirs, “Son What Are You Afraid Of?” at a carnival, then “Iron & Air” about his grandparents & being poor, & one about his father in 1968 “Uprising.” There was a look back at a building being torn down, “Boom Times at the Shake Shanty” & a tender piece about his mother buying shoes “Mother Knows,” as well as a couple of poems inspired by weather, the impressionistic “Soundings of Rain,” & a shape poem “A High Storm Coming.” A couple of new poems were “I Sing the Body Blue” & “Bodies on Consignment,” & others. He ended with a poem about comfortable middle-class rebelling “A Bourgeois Revolution.”

The style of both poets was generally discursive story-telling, but Mike’s were aggressive, in-your-face while Ken’s were more quietly ironic, a good pairing & look at the past & the present.

After a short break there were 2 poets left on the sign-up, beginning with our host Jackie Craven, who read a poem she has been working on for a long time, feels it is now finished, about her sister “Her Tree Begins to Shed Words.”

Scot Morehouse’s work is always amusing, sometimes outrageous, a good way to end the night, he read a piece on TV human-interest stories “Happy Talk,” then the hilarious poem in rhyme “Bad Ideas for Poems” reminders that every poet needs to have on their desk.

2nd Wednesday Poets happens at C.R.E.A.T.E. Community Studios, 137 State St., Schenectady, NY, at 7:30PM on, well, you know, the 2nd Wednesday of most months. Bring a couple poems for the open mic, your donation helps support the space.
Posted by DWx at 1:48 PM