[Getting Down to] Brass Tacks, November 5


It was a rare Brass Tacks open mic with a featured poet, even more rare considering who the feature was, R.M. Engelhardt, making a rare appearance in Albany. The host was el presidente of AlbanyPoets Thom Francis, who divided up the open mic list around Engelhardt’s reading.

Jim Washburn started us off musically with a “sound mash” of words & sounds from a keyboard-based sound machine. Mark W. O’Brien was here for the first time, as challenged recently by Bob Sharkey that poets entering the 2020 Stephen A. DiBiase Poetry Contest should go to a reading that they have not been to previously; he read “Peedy, My Best Friend,” an Haibun from his new book My Childhood Appropriated (FootHills Publishing). Tom Bonville was also here as a result of the challenge & read “A Procedure” a medical process written up in the language of sex. 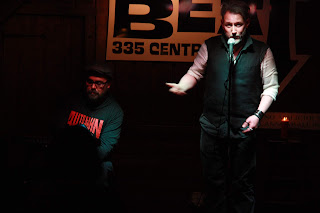 R.M. Engelhardt, the featured poet, was joined on the stage by Jim Washburn’s musical accompaniment, while Rob lit a candle borrowed from the bar for what he called “trance poetry.” Then on to a performance of Jim Morrison’s “Whisky, Mystics and Men,” along with directed audience participation (“Dada Da”), then on to read 6 poems from his new book Darklands: Poems (Whisky City Press/Lulu), generalities, abstractions & New Age faux-mysticism. Then to a couple poems not in the book, notably a dream poem titled “Into the Ether” about the gone-poet Paul Weinman. He ended with what I took to be the “title poem” of the book, but have noticed when I went to the book that there are 2 poems in the book titled "Darklands," it was one of them I am sure. A few words on the book — it is 90+ pages of what could be a 30-page book: all the poems are double or triple spaced, most poems consist of single to 3-word lines, for example the poem titled “Man” runs for 3 pages of double-spaced lines consisting of a single word. Engelhardt is a master of the cliché (or as the Fugs once famously sang, “It’s an old cliché but it’s an old cliché”).

Returning to the open mic, I read an old piece on the Albany Police Department based on a song from Nick Jagger’s film Performance “Memo from a Rich Man;” I chose my next poem based on a misunderstanding of Rob’s “trance poetry,” I thought he had said “trans-poetry” & so read my poem “A Traney’s Story.” Rakeem Carter described what he did as “from the streets of the Soul Train Musical," but to me it was incomprehensible hip-hop rhymes — but, hey, this is an open mic. The last name on the list was Harris Mueller, but he had apparently left for his own personal reasons, & that was that.