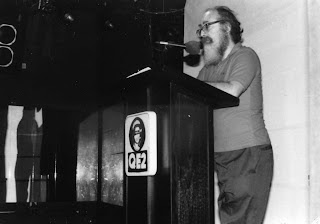 [Charles Stein, nearly 20 years ago, at the the QE2 -- the advantage of having a beard is you always look old so when you really are old folks can say, "You haven't changed a bit."]

This is the ever-morphing series, with the constant host Chris Rizzo. Tonight's lineup was stellar, with stars of academe, the art-world & Albany street poets.

Chris introduced Charles Stein with a very short poem from a 1973 book. Stein's work is characterized by experiments with language, either in English or in made-up "languages" like Lewis Carroll, so his readings often leave me scratching my head; and although his poems often deal with some sort of identifiable content, it is often the private stuff of dreams or personal links & leaps. A good example was "Beams from the Biome", a serial poem that he read random pages from, with private links & leaps, with zoos & elephants. His subjects also include philosophical musings, from "The Wall" to attempts at solving a Zen koan, to the playful statements of "Secret Surface." But there is often chuckling humor, although he seems enamored with his own cleverness.

George Quasha's work is often linked to other art forms, such as sculpture -- check out http://www.quasha.com/. He read from 3 chunks of work, the first from a new book of poems, Ainu Dreams based on the dreams of Chie Hasegawa & re-worked with approval. Dream poems often hang together on some narrative thread & are interesting for the leaps they make, not always as poetry, but as personal psychology. Another chunk was "torsion poems" (if I got it correct); one titled "Portrait" was circularly self-referential (as it should be), while an intellectual love poem was appropriately title "L Word." The 3rd chunk was from his book Preverbs; he explained what they are but when he read the poems it was hard to see how the description applied to the actual poems.

No dream poems from Mary Panza. & the only head-scratching is about Vim Vender (but she can have my overcoat if she wants). Of course, some might not know who (specifically) she is referencing in "The Adventures of an Ass-hole" or "The Revolution Doesn't Pay Shit" but most know the type. I've always been curious about the twisted values of Shel Siverstein's The Giving Tree, never read it to my kids (they preferred Edward Lear), & wondered why he is such a darling of school teachers (probably because they don't like real poetry & think kids don't either). Anyway, as an antidote I recommend Mary's new piece "Fuck the Giving Tree" which she dedicated to her daughter "when you are old enough."