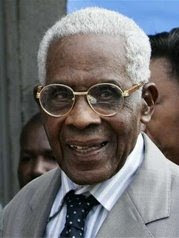 Cesaire, 94, who was mayor of the island's main city Fort-de-France for more than half a century, was admitted to hospital last week suffering from heart and other problems.

His writings offered insight into how France imposed its culture on its citizens of different origins in the early part of the 20th Century.

The theme still resonates in French politics today, as the country continues to struggle to integrate many of its residents of African and North African origin.

In 2005, Cesaire refused to meet then French Interior Minister Nicolas Sarkozy (now French president) over concerns that Sarkozy's conservative UMP party had pushed for a law which proposed to recognise the positive legacy of French colonial rule. The law was eventually repealed.

ANTI-COLONIAL VOICE IN THE 1960s

The Caribbean writer rose to fame with his "Notebook of a Return to the Native Land", written in the late 1930s, in which he says "my negritude is neither tower nor cathedral, it plunges into the red flesh of the soil."

His poems expressed the degradation of black people in the Caribbean and describe the rediscovery of an African sense of self. In his "Discourse on Colonialism", first published in 1950, Cesaire compared the relationship between the coloniser and colonised with the Nazis and their victims.

He was a mentor to fellow Martinican author Frantz Fanon, and their anti-colonial writings were a major influence in the heady intellectual climate of the 1960s and 1970s in France.

The negritude movement was a counterpart to the Black Pride movement in the United States, though it has been criticised for not being radical enough.

Cesaire was also a friend of the French surrealist poet Andre Breton who had encouraged him to become a major voice of Surrealism.

Cesaire's anti-colonial rhetoric did not prevent him from having a long-lasting political career.

After becoming mayor of Fort-de-France in 1945 at the age of 32, he was elected deputy of parliament a year later, a post he held until the early 1990s.

A graduate of the prestigious French Ecole Normale Superieure -- unusual for a black Martinican in the 1930s -- he remained a member of the French communist party until the Soviet Hungarian repression of 1956.

Cesaire was born in 1913 in the small town of Basse-Pointe in Martinique. He married Suzanne Roussi in 1937, a gifted writer in her own right, with whom he had six children.
Posted by DWx at 9:30 AM

poet as mayor! Could that ever happen in our country.