Live from the Living Room, April 9 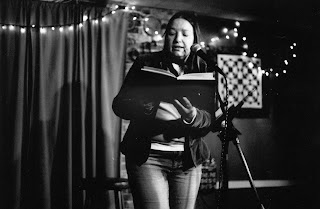 Our host Don Levy introduced tonight's featured poet Sally Rhoades. Her work rises out of her life, with poems about her mother ("My Mother was a Waitress"), friends, about growing up ("I Grew Up Poor," "Street Fighter"), her daughters ("The Gate Closes", "Without Daughters," "The Daughters' Diligence"), about her life as a dancer ("Dance Questions All"), even about riding the train to NYC ("Six Yogis All in a Row", "Snow on the River"). Later, during the open mic section, Sally read a poem by her friend Nur Cheyenne, "Old Friend." Nur read with other SUNY students at the Albany Art Gallery in March 1990; she died of cancer a year later in March, 1991.

After the break I read 2 newer pieces, "Jack Sketching," & "Walking Washington." Bob Sharkey did his "St. Patrick's Day program" with Irish poet Dan Lordan's "Explanations of the War" then Bob's own poem on the confusion of terms & gender, "Fairy Dust."

Mimi Moriarty read "Flight to Gethsemene" about Thomas Merton's body being on the same plane in 1968 with the bodies of soldiers killed in Viet Nam, then "What $25 will Buy."

Kristen Day was back & read "Phobic" & then the only poem I can remember hearing about the frustration of frosting a cake. Jim Masters, who has a short article in the Center's latest issue of their newsletter, read "When the Angel of Death Calls" reacting to poems by William Cullen Bryant & Dylan Thomas.

A new voice, Jeff Wellman, read 3 "haikus" that were just written here, one on death, on a Red Sox Cap that Jim Masters was wearing, & April 9 (in the park).

Our gracious host, Don Levy, left us with a bit of kvetching humor, "See You in the Complaint Department."