I’d missed the first event in this series last month but was able to Zoom in on this one (since I will be one of the featured readers in December I figured I’d better be there). Poets Susan Chute & Lucia Cherciu introduced the program, with Tim Brennan handling the open mic portion. There was a good showing of about 50 attendees. The 3 featured readers each read for about 20 minutes each, interspersed by the open mic. 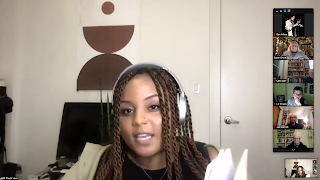 Shayla Lawz read from her recently published book of poems Speculations, n. (Google Books). It is a fractured text which she read through without pause, about death & violence, but includes love poems, poems on angst, breakups, the world ending & beginning beyond speculation, “today I want to be starlight.”

She was followed by an open mic poet, Jay Klokker who read a memoir piece in many short parts titled “Moon Light Saving Time.” 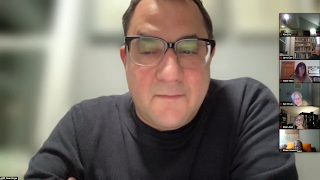 The 2nd featured poet was Sean Singer who read from his book, Today in the Taxi (forthcoming from Tupelo Press), in that genre of poems by taxi drivers in NYC, each poem beginning “today in the taxi...” with different fares, different characters — jazz (Mingus, Ellington), references to Kafka, Jewish commentators, philosophers & Jewish lore, even The Lord makes an appearance.

In the category of apples not falling far from the tree, open mic poet Madeleine Cherciu read “Cats” a short, fun rhyme. Ken Holland followed with a poem titled “Fire & Faith,” on the Notre Dame fire. 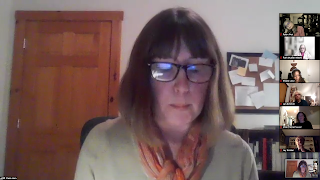 The final featured poet, Claire Hero, said she has been writing not poems but fiction/non-fiction hybrids. She read a piece titled “Jeanie in Pieces” about a feral child, a grim portrait of her family in 1970, compares herself to/haunted by Jeanie, combines the facts, poet’s musing, images, self-amputation, then the poet’s own story, the history/meaning of words.

Then on to finish off the Open Mic. Ken Chute, our host’s cousin, read about a young person helping an older person brush their teeth. Robin Weir read a piece written after Hurricane Ida & the floods in NJ people where people died in cars. I had been uncertain what to read but Ken Holland’s poem inspired me to read my own take on the Notre Dame fire, a poem titled “Tourism.”

This series, endorsed by the Wallkill Vallery Writers & the SUNY-New Paltz Department of English, continues monthly & you can find a link to the series & the Zoom link at https://www.facebook.com/NPNextYearsWords/