Nancy Klepsch & I & a full open mic list of poets were back among the mushrooms once again. There were so many poets (19 on the sign-up sheets) we almost had to ask Avery, the proprietor of Collar City Mushrooms, to put out cots for us, but not quite. 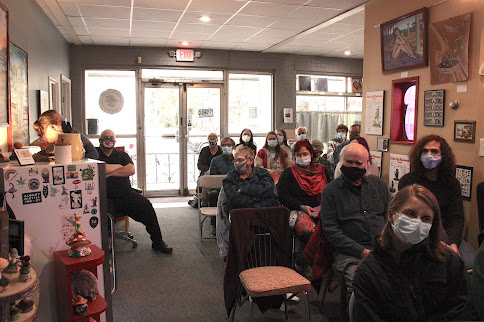 1st on the list was Sally Rhoades, who was here for her 1st time, but a veteran of the local open mic scene; for those of us who have been to open mics where Sally has read in the past few years, or who are friends on Facebook, we are familiar with her beloved Aunt Polly, a long, loving & tender relationship, & Sally’s 1st poem was a history of Aunt Polly & Sally’s memories of her, then a poem some of us have heard at open mics, “Riding Shotgun,” from a few years back when Aunt Polly was 94 — I never met Aunt Polly but certainly feel I know her — blessings & peace.

Bob Sharkey began by mentioning the annual Stephan A. DiBiase Poetry Contest which is now open for submissions at dibiasepoetry.com  -- do it now before the rush -- then Bob read a short vignette “An American Werewolf in London” — ah whoo! Tara Kisler read a piece titled “The Idiot Box” about TV, of course, but also about Donald Trump. Carol Jewell’s first piece, “Work in Progress," was fittingly short, then on to a poem about the penises of various animals, “The Natural World.” Avery Stempel, our host here at Collar City Mushrooms, has been, as many of us know, renovating for the last 15 years, an old VW bus & today he read about taking it out for the 1st time “Into the Sunset,” then a piece inspired by a painting by John Zoccoli whose are is currently on display here, “Portals & Doors.” 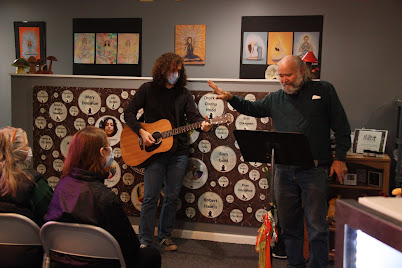 My partner in poetry in 3 Guys from Albany, Charlie Rossiter, made it over from Vermont, the first of a bunch of Vermonters creating an Interzone between New York State & Vermont, with his son Jack Rossiter-Munley on guitar, began with a Rossiter classic “Reading Black Snake Solos Listening to Haydn” from his early collection Evening Stones (Ye Olde Font Shoppe, 1999), then a tribute to Howlin’ Wolf “Oak Ridge Cemetery.”

My co-host, Nancy Klepsch, read a piece on aging & love, then a mythical praise chant “Holy Crone Holy Spider.” Naomi Bindman is another Vermonter on the Interzone (but then I am a New Yorker on the Interzone), read a seasonal/tree poem “Tending,” then one for Nancy, responding to her Facebook post about an influential teacher, “Ruminations on Teacher Magic.” Vermonter Bridget Elder’s poems were about poems, the 1st about needing for poems to be pulled out of her, then a short, recycled/revised piece. Kelly W. has become a regular here, also read a poem about a John Zoccoli painting from the workshop here last night, “By a Thread.”

Joel Best read another of his “impressionistic” pieces (his word) titled “June 1996.” I followed with a litany recalling my Elders “The Communion of Saints.” Vermonter Laura Ellzey read a piece I like a lot on the joys of knitting, in both English & Spanish. Yet another Vermonter, Kenn Ash, read a piece I’d heard him read this past week on the 2nd Tuesday Zoom from Bennington, “The Nag,” even more funny knowing the punchline this time.

Therese Broderick’s poem was about problems with her lawn mower “Extension Cord,” then on to a tender tale of married bliss “Why I Get Out of Bed.” Jil Hanifan postulated in her poem that the “Origin of the Universe” is us, then riffed on an overheard remark, “Our Topic was Wheat.” Kate Crofton who found her way here by way of The Holy Local open mic read a poem about gardening advice from her mother “Growing Leggy” that becomes a metaphor for her own self & her journey of discovery. 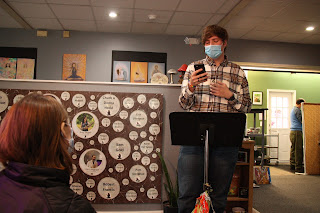 Nathan Smith was also here for the 1st time, read 2 sad poems, the 1st a break-up poem, like a letter to “you,” titled “Dying Alone, A Love Poem,” then one literally titled “Sad Poem.” Tim Verhaegen finished off the afternoon with 2 pieces in true Tim-Verhaegen fashion, the 1st “1990 Afternoon at The Pines” a near-sociological study of “the guys” at this section of the beach at Fire Island, the 2nd piece tied in yesterday’s ekphrastic poetry workshop here at Collar City Mushrooms on the paintings of John Zoccoli with one of Joni Mitchell’s (a favorite of Tim’s) songs.

It was quite an afternoon of poetry here in Troy on the banks of the mighty Hudson among the mushrooms & John Zoccoli’s paintings. Check out Collar City Mushrooms in-person, or online, & join us, as the title says, on the 2nd Sunday of each month at 2:00pm — poetry, prose, even a stray guitar sometimes.