The poets were back among the mushrooms on a Sunday afternoon. Nancy Klepsch & I are the hosts of this monthly writers open mic, now at Collar City Mushrooms in Troy, NY.

Everyone had signed up for the open mic but #1was still open so I took it & read a poem not by me but instead by Enid Dame (1943 - 2003), her “Holiday Poem” from 1996, which I always read as “the Muse” at the Third Thursday Open Mics each December until they were shut down by the pandemic. Ray read next, said all his poems were untitled, the 1st about preparing for the moment, the here & now, then a political piece -- channel surfing, sitcoms, Judge Judy, etc. 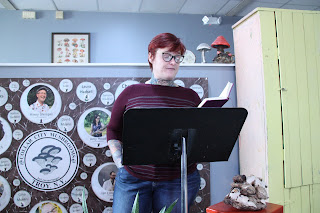 Kelly has been coming here since the beginning, today read a sad but defiant piece about a  relationship, titled “Paint Dries” (“… & I walk away”). The proprietor of Collar City Mushrooms, Avery Stempel, draws poets here because he is a poet too, read a couple of “vignettes,” “A Glimpse” (of peace), & “Early Morning Close Call” (while driving). Tim Verhaegen also likes coming here, read “Death of a Friendship,” then a look back “A Boy Walks on the Train Tracks Alone as a Freshman in College.”

Laura Ellzey made the drive over from not-so-far-away Vermont & read her poem “The Tormenting Storm”/“La Tormenta” about an overheard conversation, with a tornado metaphor, in 2 versions, one in English, the other in Spanish. Kenn Ash also came over from Vermont & performed “A Christmas Farewell” a character wallowing in memories & sadness.

Kate Crofton has also found a home here among the mushrooms & poets, began with memories of her grandma “Inheritance,” then had us laughing at her funny — & angry — piece titled “Vagina Diner.” My co-host Nancy Klepsch began with a poem from her book God Must Be a Boogie Man (Recto y Verso Editions, 2017) the untitled last poem in the book, then a recent tribute poem to the poet Bernadette Mayer “A Dozen Blue Eggs for Bernadette.” 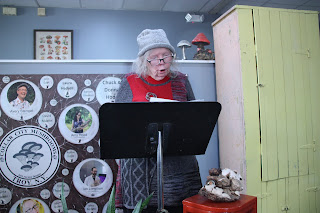 Julie Lomoe began with a rambling introduction about her paintings that she exhibited at the original Woodstock Music Festival that will be on exhibit this Summer in Bethel, NY, then read a poem that had nothing to do with that about a dying cat, & ended with the much more amusing parody of a Xmas standard, “It’s The Most Over-Hyped Time fo the Year.” Thom Francis, otherwise known as el presidente of AlbanyPoets.com read a short piece titled “Family Tree” (it is made of twigs, bottles, etc.), then one about memories engendered by the contents of his pockets.

Nancy & I are so thankful to be able to continue this open mic at Collar City Mushrooms, 333 Second Ave., Troy, NY, 2nd Sunday @ 2 — join us to find out why so many poets keep coming back.