The usual host, Jackie Craven, was back, Daniel Sennis had filled in for her for a few months. This is one of those Zoom open mic responses to the pandemic that will continue on Zoom rather than going back to an in-person event.

First up to read was Alan Catlin who began with a poem titled “The Purifier” an ultra-descriptive piece about an annual yard sale, “not even a little bit exaggerated,” he said, then a response to watching a documentary about the nuclear power plant melt-down at Chernobyl the real & surreal. 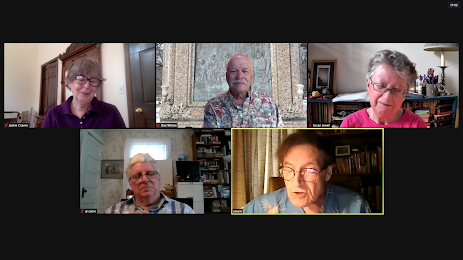 Scott Morehouse gave a theatrical reading of his story titled “Literary Possibilities” about a literary book club at which a woman reads from her steamy romance novel, a wild ride as usual from Scott.

I read 3 poems on art-related themes, the 1st titled “Reading Memoir In the Laundromat” responding to a book by Patricia Hampl, the 2nd imitating Alan Catlin’s poems “Arts Festival, DelRay Beach” & the 3rd about a painting by Helen Stein a the Cape Ann Museum “Marsden Hartley’s Eyes.”

Susan Jewell’s 1st poem was about the unexpected, “The Herd by the Side of the Road Listening to Yeats,” then another unexpected mixing, this of Leonardo da Vinci & the rock star Neil Sedaka, “My Vitruvian Man.”

Sarah Chaviano read a prose piece titled “Who Am I?” from when she first got diagnosed with kidney disease, then “The Mud & the Lotus” inspired by a post from Plum Village.

Jackie Craven finished out the night with some short prose blocks in which times of the day are personas, like some she read recently at Caffè Lena, “Minutes Run Amok, 5AM,” & “8AM on the Bus,” anything can be a persona if you can imagine it.

You can find the Zoom link for this monthly open mic at the Facebook page WritersMic, held on the 2nd Wednesday of the month.