Now this open mic is an open mic. Nancy Klepsch may have to open the door, but anyone can knock. 2 poems or a short prose piece less than 5 minutes, no “second round.”

I went first, just because, & read a couple old poems “The Hundred Thousand Ten Thousand Million Buddhas” inspired by reading the Lotus Sutra, then a poem dedicated to Sally Rhoades who once described the annual Scissortail Creative Writing Festival in Ada, OK as “The Listening Festival.” 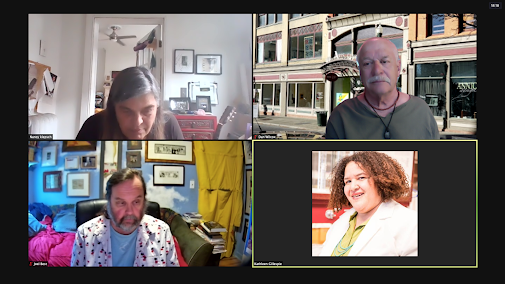 Joel Best began with a poem written this week on faith & belief with images of everyday & of Summer flowers, then a birthday poem in which he thinks back to August 1977, seeing fireflies & feeling his mortality.

Kate Gillsepie was having problems connecting but managed to get in with a couple of short, colorful poems that were written on Martha’s Vineyard.

Our host, Nancy Klepsch, began with a list poem “What I would say,” then one pondering urban land along the River, even with its trash, titled “Everything is Sacred.”

Julie Lomoe also had a hard time getting in in spite of “a brand new jazzy computer,” but ended up using her husband, Robb’s, computer, read a piece written last night, “Quartet of Elders,” a gathering with her pets, & herself & Robb.

2nd Sunday @ 2 had been at the Arts Center of the Capital Region in Troy at their request for a number of years until the corona virus pandemic shut it down, since then we have persisted on Zoom. We had hoped to return to The Arts Center but they have informed us that they will not be open on Sundays due to funding issues. Nancy is actively exploring other venues in Troy where we can meet in-person & we hope to have an answer soon. Stay tuned.