Back to Bennington, VT for this open mic run by fellow 3 Guys from Albany member Charlie Rossiter, on his birthday (I won’t say which one, but it is less than 100).

I was first up & read 2 new poems “Are Ewe a Frank Robinson?” & “Last Weekend in Gloucester.” Laura Ellsey is a regular here & read “What is Depression?” & a poem written for a dog-grooming business (a first time for me for such a poem). Ken Ash, another regular, read a humorous rhyming poem titled “Christmas Redundancy.”

Jason Price Everett, another stalwart of this event, read a long prose piece entitled “Ostinado” a character study of repeating (thus the title) images & phrases written in the third person without dialogue. This was Michele Wiegers’ first time here & she began with a poem about her son titled “Caleb’s Cadence,” then “A New Poem” about what dragged her out of bed. Bridget Elder was also here for the 1st time, having recently moved to Bennington, read a short piece written today. 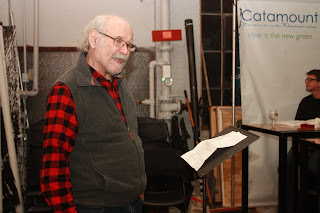 Our birthday boy, Charlie Rossiter, read a poem from a painting “Got the Blues” then a re-write of a lost poem “Don’t You Think There’s Something About You Should Change?” (which I remember performing with 3 Guys from Albany). Bill began with an eco-poem “Extinction Looms,” then a piece written a long time about about his 3rd son & looking for spiders.

We took a short break to “re-fresh” in whatever was our fashion, then on to a 2nd round. I read another new piece, about MFA programs, “To the Consternation of …” Jason apologized for the length of his reading the first time & read a 2-page version of the same piece, both of which to my ear sounded like Samuel Beckett.

Laura also read again, a poem in English then it’s Spanish version, “I’m Going to Knit,” then “My Response to Stamps.com” both poems in rhyme. Speaking of rhymes, that’s what Ken does too, & read 2 poems about dreams & getting up in the morning.  Michele read about soil & worms & birds in a piece titled “Backyard Prayer” then a poem full of ocean metaphors “Never Run Dry.” 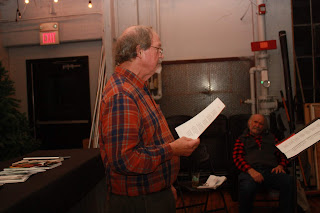 Bill returned with another eco-poem “Something’s Happening” on climate change, then one about the Solomon Islands from World War II to the current imminent flooding of the island, & ended with a poem in Spanish he just found in a copy of Blue Collar Review “The Last War.”

Our host, Charlie, brought it all home with a couple poems centered on Bennington, “Coming Home” (from Saratoga Springs, NY), then a landscape poem about a mountain view, all too common around here.

According to Charlie it was a record-breaking attendance, counting readers & listeners — glad I was there for the historic event. & you can find Poetry/Spoken Word Open Mic in the back room of the Tap House, 309 County St., Bennington, VT each second Tuesday of the month, sign-up at 7PM, reading starts 7:15PM.
Posted by DWx at 8:18 PM