We were kicked upstairs due to a performance in our usual space, the black box theater (named after yet another crooked politician), but it was brighter, sunnier up there & not just because of the sunlight, but also because of the luminous poets & listeners. The hosts were Nancy Klepsch & myself, DWx.

First up was Bob Sharkey who read a magical poem about a visitation from his great-grandmother Brigid Connolly “Brigid Visits East Latham.” Joel Best followed with a poem perhaps titled “Nighting” that was perhaps a ghost story, then a poem about family “We Are 9 Old Chairs.” Dave DeVries began with a memoir of a ’58 Chevy “Car Fever,” then on to one titled “Questions” which was just that. 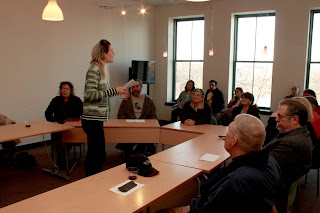 As you can see from the photo we were sitting around tables arranged with an opening in the center & lithe Kendall Hoeft was the only who was limber enough to crawl into the center where she read her first poem with dance moves “How to Match the Sky,” then a new piece that she read from back on the perimeter “Of Eden” back in the Garden. I didn’t read one of my own poems but instead read my favorite holiday-season poem by the marvelous (but gone) Enid Dame (1943 - 2003) “Holiday Poem” (“… we don’t need the solace of bought objects. We need other’s light.”). Mike Conner, who is the master of the seasonal poem, read one about Autumn “The Smell of Memory,” then a prose memoir of living in Japan in the ’90s “Shinkuchan Wandering.” Stealing a page from Peter Lamborn Wilson (who is also Hakim Bey) Jay Dalaba signed up as Hex’m Jai & read a poem about the cold “That Blue Bastard” then one then engendered some intimate discussion among the audience “Since It’s Sunday It’s Laundry Day.” 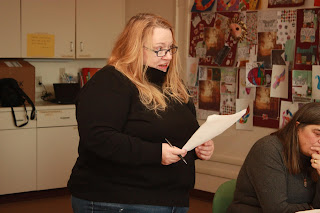 Mary Ellen Kelleher is an old friend of Nancy’s who began with a calendar poem titled “The Six Sisters & Their Brothers” inspired by a poem by Billy Collins, then an old poem about watching a woman across from her at a conference “Academic Itch.” Karen Fabiane read a new piece never read out before today “No Water There” about change & crossing over, then “Collars & Cuffs” which began with an old coat & spun out from there. My co-host, Nancy Klepsch, read 2 poems on loss, “At 94” about a friend who didn’t make it to 94, & an untitled piece beginning “I am shaped by dreams …”; but the best part was when she said “We write alone but do not live alone.” Jil Hanifan returned us to the seasonal/holiday theme with a piece about the parking lot of Walmart’s for last-minute shopping, then another that she began with a snippet of a Xmas carol.  Vik began with a short piece "It's a Heart I Love," then another about Primo Levi. 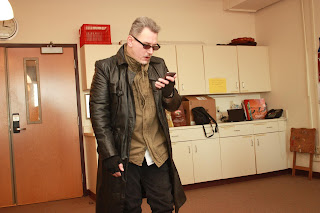 R.M. Engelhardt is the host of the monthly Troy Poetry Mission, now at Elixir 16 on 2nd St. in Troy, & is the only person I’ve ever seen who puts on tinted reading glasses when it’s his turn, perhaps he’s going blind; he read from his phone the poems “Done Me Wrong” & “Not Fade Away” which is another in his long series of God poems, unfortunately “stepping on his punch line,” as Jil said.

So if you write alone but want to share some of it there is this monthly gathering 2nd Sunday @ 2: Poetry + Prose at the Arts Center of the Capital Region, 265 River St., Troy, NY — Free!
Posted by DWx at 2:43 PM