Getting Down to Brass Tacks, December 4


According to Thom Francis (el presidente), who should know, this was the 10th gathering of this open mic series at The Low Beat. It was also the public start of a week-long celebration of Thom’s birthday. 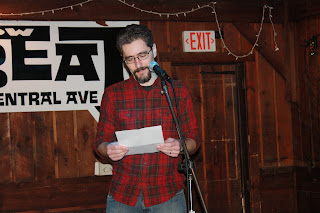 First up for the open mic was the long-absent Matt Galletta who read a wrestling poem as a sort of birthday present for Thom “Going Pro,” then an older piece “This Will Happen to You.” I’ve been sickened by the gush-fest for the most recent Dead President, Georg H.W. Bush, who gave us the invasions of Panama & Iraq, the pardon of Iran-Contra conspirators, & who ignored the AIDS crises, among other Patrician-class attacks, & so read my poem written after attending a rally against “Oil War I” in January 1991 in Washington, DC “Peace Marchers at the Viet Nam Memorial.” Christa DeMarco read 2 poems about elderly folks she has been caring for on her job, “6-Minute Egg” & “Impact.”

Always one to have cake for any celebration, Mary Panza passed around mini-cupcakes to kick off the celebration of Thom’s birthday (actually on Sunday, December 9) which strangely went well with the beer I was drinking & of course we all sang the Happy Birthday song.

Brett Petersen, wiping cake from his beard, read a couple poems from his Blog, like exercises in automatic writing, or a punk version of John Ashbery, “The Bottom of the Pool is Hungry for your Brain Damage” & “Have a Drink, Literally, On Me.” Alyssa Michelle has established herself as a regular here, with her first person poems, the first “Introvert” in which she tries to explain herself to extroverts, & the next about driving & watching the lights in the rain “Pause.” Kendall Hoeft read a poem titled “When the Body Breaks” then one starting with a quote from Anna Karenina & was about fear & desire & oysters & pearls “Of Sea & Sky.”

It’s been awhile since I’ve seen Poetyc Visionz out & about & he read a new piece “I Met God on Lark St.” which was a sort of re-make of his Number 7 poem, then another in his signature wordplay (& an example of why he has been dubbed “the Pastor of Positivity”) “Be Grateful.” The Birthday Boy, Thom Francis, shared a poem about water flowing down 4th Street “Jesus Walks on the Water.” 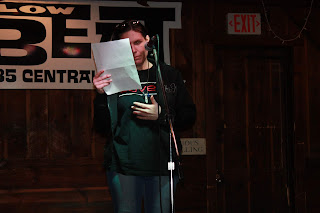 Sarah Fountain has been to the Brass Tacks readings since the beginning but doesn’t always read, & was coaxed to read tonight; she read an intensely personal poem written after talking to her mother for the last time “Never Enough” & it was clear to see why they haven't spoken since.

Getting Down to Brass Tacks is a open mic (primarily) held on the 1st & 3rd Tuesdays of the month at The Low Beat on Central Ave., starts about 7:30PM. Another fine poetry event brought to you by the folks at AlbanyPoets.