Our featured poet, Elizabeth Thomas, had to cancel but I will re-schedule her for 2012. But there are plenty of great poets in this area with a bunch signed up for the open mic tonight, with plenty more in the audience just to listen. & since there was no featured poet, everyone got to do 2 (!) poems tonight.

But first, the muse for the night was one of the father's of 20th Century poetry, William Carlos Williams (his birthday September 17). Alan Catlin paid tribute to another great 20th Century writer whose birthday was also September 17, Ken Kesey, by wearing a "One Flew Over the Cuckoo's Nest" tee-shirt. He read the last 2 poems he has written, "Knowing Bach at 4:30 AM" from his weekly Bukowski writing prompt exercise, then on to another American poet, "My Dream Date with Sylvia Plath." 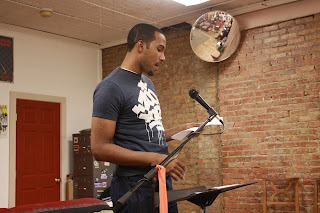 A new voice & face here at the Social Justice Center was Luis Pabon with 2 sexy hip-hop style pieces, "Her Body is Some Body" & "Deep Tissue." I had picked out a couple of recent poems for tonight, but got a request from one of the non-reading poets to read "Poeming" & "The Lesson" from my chapbook, Poeming the Prompt (A.P.D., 2011). Anthony Bernini has a new book coming out soon & read "Know My Name," & another titled "Day Trip" (Anthony's book launch will be at Poets Speak Loud, at McGeary's on October 24). 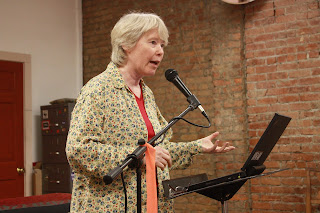 Another new face & voice, at least here, was Elizabeth Gordon who frequents the 2nd Sunday open mic at the Arts Center & now goes by the performance tag of Elizag, who read (from her laptop, "tired of buying ink") a slam-style piece "Blue" class-warfare with a professor. Moses Kash III was here too, starting with acknowledging advice he has received over the years from writers, mainly from the Harlem Black Arts authors, then on to a recent piece, "I Have to Go Now Irene" on love & trusting the other. A last minute addition to the sign-up, just coming home from the job, was Marcus Anderson, artist & poet, with "8" on the burden of work.

Third Thursday Poetry Night is at the Social Justice Center, 33 Central Ave., Albany, NY, 7:20PM on, well, the third Thursday of each month, usually with a featured poet, always with an open mic.
Posted by DWx at 6:28 PM