This was "Albany's first Slam in 10 years" claimed co-host Dain Brammage at the new slam venue at Valentine's. But poor Dain's brain must be addled, since as recent as March 2006 he was hosting a slam at the Bayou Cafe on North Pearl St. right here in Albany.  Or was that another "Dain Brammage"? Oh well, tonight the house was packed for the first in a new series of bimonthly events sponsored by AlbanyPoets, Urban Guerrilla Theater & Frequency North, an un-holy 3 if I ever saw one.

There was an open mic with the readers, like the slam, selected at random from sign-up slips in the hat, & also like the slam, limited to 3 minutes (but not enforced). The open mic host was Mojavi & the poets were Poetyc Vyzonz, Stephen Leslie with 2 Haibuns, Eliza G. with some poems composed from the text on the back of an aspirin bottle & Murphy's Oil Soap & the sexy-funny "Heterosexual Phase," Michelle Bula (a long drive to read 1 poem, "Hope Springs"), Bless "lyrically putting myself on the front lines for you," 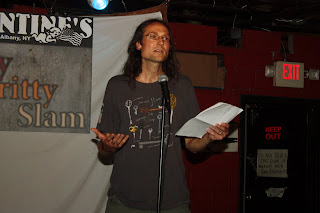 & Dan Rain using appropriated text for his tsunami poem "Harbor Wave." A pretty good selection of open mic poets & poems & reason enough to be there in itself.

The slam was an "8-4-2" with the 8 contenders chosen at random, with Miriam Axel-Lute chosen as the "sacrificial poet" that slam events use as a way to give the randomly chosen judges a chance to practice scoring before it matters. Her poem was the slam-respectable "Things Fall Apart."

Algorhythm's angry piece was done in short line rhymes, as was Jessica Layton's "Fuck you & your Jesus…" piece. Tammy Lopez started singing then just over-dramatized her shopping list of the world's injustices. Emily (Hamilton Creative Infinity) Epstein read way too fast a piece I think was called "Infinity." Shannon Shoemaker did her poem about love gone bad beginning with the line "I need a drink…" Kevin Peterson's poem "Waterworks" was about STDs, while my performance in tribute to John Cage was unspoken (of course), & Illiptical took it off the mic with "Their Eyes Watching Each Other."

There was a lot of silliness between rounds with goofy word guessing games; better to have the open mic poets between the slam rounds, I say, while the scorekeeper tries to work it out with a pencil.

Next down to 4 poets, 3 of whom will be in the money. Not me, for sure -- I had the lowest score of the 8 (sort of like the Houston Astros in National League standings). Illiptical did a poem on Grinch teachers, while Shannon Shoemaker followed with "dyke on a bike" in the suburban school parking lot poem the audience liked. Tammy Lopez came down off the mic & the stage with the same sort of breatless piece driven by rhyme, as did Algorhythm also off the stage.

So when the smoke cleared, Algorhythm was in 3rd place, & Shannon & Tammy duked it out for the last round, with Shannon first, another love-lost poem standing on the roof of the parking garage. Tammy was off the mic again, but now her voice much weaker & could've use it, a piece talking with a girlfriend about anger & vengeance, just under the limit. When the votes were tallied, the winner was Tammy Lopez & Shannon Shoemaker a not-shabby-at-all second.

You can find the scores on the AlbanyPoets website. But, as always, the winners were us in the audience &, of course, like most slams, more performance than poetry.

This was the first in this ambitious series of twice-a-month slams, at Valentines on New Scotland Ave., Albany (NY, just so you don't go to the wrong Albany), sign-up at 7:00PM, slam at 8, 5 dollars.
Posted by DWx at 4:33 PM