This was another stellar event in the Sanctuary for Independent Media's Fall schedule, the jazz poet Jayne Cortez & drummer Denardo Coleman. She often performs & records with her band The Firespitters, but tonight it was just words & drums & that was jes' fine, more: it was great. 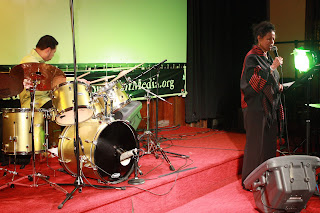 Of course, it was night filled with jazz rhythms, words, names, drums, beginning with her tribute to the Cuban drummer, "I See Chano Pozo." Other drum/poems included "If the Drum is a Woman" (a response to Duke Ellington's suite, A Drum is a Woman), & "Drums Everywhere Drums." "Samba is Power" almost got me out of my seat, my feet & hands beating along with the words. "Taking the Blues Back Home" & "Sunny Side of the Page" were other music tribute poems. 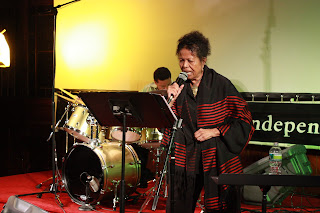 Her poems are built, like music, on repetition, parallelisms & frequent, compelling similes, lists & litanies. Their messages are right out front so she dispensed entirely with introductions -- if you didn't get it you weren't listening. Cortez can deliver the message without the finger-pointing of a preacher. And so she performed pieces about pollution (spiritual as well as environmental), about lying foreign policy, & oppression. In addition to "If the Drum is a Woman" she had a marvelous poem beginning "Everytime I think about us woman…" where she becomes a tree, & the message to us all "Find Your Own Voice" ("…& use it/use your own voice & find it"). She was about to quit when the crowd demanded an encore & she obliged with a short piece, "I'm gonna shake like a violent rain storm…"

Many of the poems she performed tonight I found in her 2002 collection from Hanging Loose Press, Jazz Fan Looks Back. During the books signing I overheard Jayne Cortez say she'd only been her once before. In "the world's largest collection of photos of unknown poets" I found a couple shots of this famous poet when she read (no band, no drummer) at the Writers' Institute in February, 1989.

Jayne Cortez should come back more frequently -- & the next time bring the band.
Posted by DWx at 11:39 AM