Saturday was the busy day with 2 "Town Meeting Discussions" at the Cape Ann Museum, a showing of Henry Ferrini's film Polis is This: Charles Olson and the Persistence of Place, and a reading by Diane DiPrima & Michael Rumaker, so I'm breaking up this entry into 2 parts. 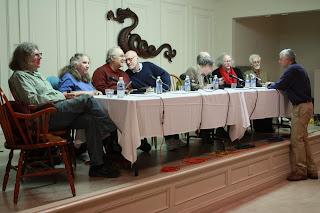 The morning meeting, or panel discussion, was titled "Remembering Olson" & all but 1 member of the panel had actually met Charles Olson & they in turn talked about how they met. The one "biological connection" was Charles Olson's son, Gloucester carpenter Charles Peter Olson, who gracefully acknowledged his place here & deferred to the recollections of the panelists. The other panelists were Ammiel Alcalay, Diane DiPrima, Chuck Stein, Peter Anastas (moderator), Thorpe Feit, Michael Rumaker, Ed Sanders & Roy Skodnick. Each panelist discussed how they met Charles Olson & their first impressions, but the common thread was that everyone said something to the effect that he talked "for hours." Chuck Stein pointed out that Olson had a way of speaking to one's essential self. 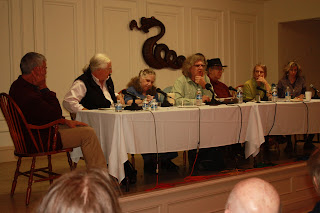 The second panel was titled "Olson's Project" with some of the morning's panelists. They were Charles Peter Olson, Fred Dewey, Diane DiPrima, Ammiel Alcalay (moderator), Chuck Stein, Kristen Prevallet, & Kate Morgan. I had to leave early but the tone was set early. Ammiel noted that if Olson is central to 20th Century thought (as many scholars contend) then we -- gathered here in Gloucester -- are central too. Kristen Prevallet took us to the "junk DNA"'s syntax & biological sentences, linking us to Olson's "all that matters moves." Dancer Kate Morgan led us through a physical exercise meant to demonstrate the key concept of "proprioception," which I for one was grateful -- that's what it's all about.

The museum also had a small exhibit of rare copies of early editions of The Maximus Poems.
Posted by DWx at 11:26 PM

why not post this on your blog. I'd love to use some of your shots for the Gloucester Writers Center