If you have one of the bookmark style, full-year schedule of the Sunday Four Poetry series you will have noticed that I was scheduled to read on April 26. But due to a family wedding in Philadelphia I switched dates & instead was the featured poet today. It was like tag-team hosts, with Mike Burke introducing the afternoon's event, then Edie Abrams taking over the host duties for the open mic, & Dennis Sullivan introducing me at the end.

Mike Burke was the first of the open mic poets with 2 dog poems, which usually make me gag, but his "Tiny" & "His Yorkies," had enough humor & tough-sentimentality to make them work. Mimi Moriarty's first poem, "Delicate Woman," about her first open mic, had an uncharacteristic number (more than zero) of "Fuck"s in it. Her family memoir "Decade in 3 Movements" was more like her. 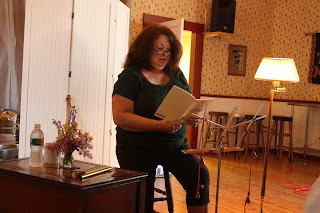 Barbara Vink read old poems from The Every Other Thursday Night Poets 2006 collection, Poetry Don't Pump Gas. In addition to being a poet, Larry Rapant is also a philosopher; his "Swooshtika" on the Nike logo rambled on in that philosophical vein.
Dennis Sullivan went from words to melons with "In the Deep Silence" (words, like a work shape-up, waiting to be put to use) & a tribute to fellow host, Edie Abrams (who didn't read any of her poems today), "The Fields on the Bender Farm," which she is fighting to protect from development. "Mark O'Brien" is such a common name that this one likes to go by "Obeedude;" he told us "How the Poet was Hit in the Head by the Rock He Threw," by "The Events that were Somehow On Top of Him" "Under the Wandering Moon."

Tim Verhaegen read what is often call "O.P.P." (other people's poems) except that these were songs, by Melanie, Carly Simon & Joni Mitchell. [Note to Tim: until I can go to the library & checkout your "Collected Poems", read your own stuff -- I can listen to the records any time I want.] When Tom Corrado took the little square of paper out of his pocket, unfolded it carefully, then read from the wrinkles "Rubber Maid," for Larry Rapant, it was a performance in itself. Alan Casline is a champion of the short nature poem & today he had ones about a dead branch, about bees & rain, & about the heat. Philomena Moriarty (no relation to Mimi) read a couple of Irish-theme poems from Oriel, put out by the Unitarian Universalist Church (or society or congregation, or whatever it is), "Lifting the Veil" & "On Being Irish." 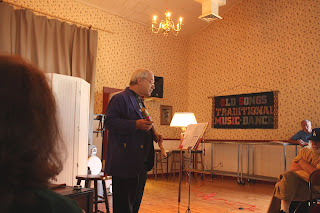 With a room full of such fine poets I was energized for a reading that the agonized playlist had been changed & massaged & tweeked & manipulated until I was no longer sure where I was going, but I went. But here it is: "The Communion of Saints" (as invocation), "Birthday Poem" (1/09), "Dot Dot Dot," "The Cardinal," "For Natalie," the 2 "Epidemic" poems, "Said Again," 2 Buddhist haikus, "On Reading the Tibetan Book of the Dead" (with rain stick), and blowing bubbles while "Dancing on the Mandala." It's all (l)inked together in the breath, if in nothing else.

Then we repaired to Smitty's for food, drink & conversation. Oh yeah.

The 4th Sunday of each month, in Voorheesville, NY, at the Old Songs Community Center, 37 S. Main St., 3PM -- bring poems to share.

oh my Dan Wilcox, how important of you.

until my own collection of poems is in the library? strange.

My reason for reading at open mics isn't self-promotion. If I don't have a worthy message, I love reading writings from the best writers in the world.

What is your reason for reading at open mics and your nationwide tours Dan?

Am I inferior and damaged because I'm not publishing my own books and hounding people to buy them?

I love ya Dan Wilcox but with my insecurities around my writing and what I choose to write, I'm always self-conscious when you're at open mics. I do not feel safe. Sometimes I want just Dan Wilcox to be at an open mic - not Dan Wilcox the blogger. I know that won't happen of course.

I wonder if others feel the same way. I can't imagine anybody would say so.

Not many admit if they're afraid of someone. I'm revealing myself as the wimp I really am. me and my big mouth. Take care, love ya Dan.