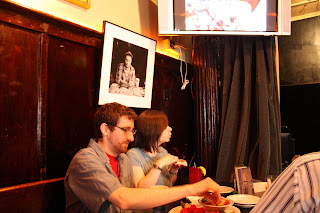 Some years ago, before Douglas RothschildTM settled in Albany, we exchanged some words about the Albany poetry scene on the pages of the Newsletter of the St. Mark's Poetry Project. He stood corrected & I sit where I stand. This day it was a distinct pleasure to be among Doug's friends & fans in the back room of the Lark Tavern on the anniversary of D-Day while outside folks were (f)Art(ing) on Lark.

I joked that I had always wanted to meet Hesiod, but this is a different Theogny (subpress). Having lived many years in New York City & worked in downtown Manhattan, I know whereof Rothschild speaks, so the title could be glossed as "Theo (god) Goes to New York." The poems are short, playful, New York wise-guy, some simply transcribed phone messages describing what was happening, more Frank O'Hara in his personal engagement with the City, as opposed to Chales Olson (invoked in one of the blurbs) & his historical/scholarly investigations. The poems are especially fun if you know downtown Manhattan, but fun just the same if you love any city.

Rothschild appeared in a grey zoot suit, complete with long waist chain & pearl-grey Cab Calloway hat, & in between poems tried to get us to help him roll quarters for his job at the laundromat, a Tom Sawyer trick. He did a series of short readings from the book, interspersed with breaks & readings by audience members. He had put out the word that he wanted "invasion" poems, so we got everything from Pierre Joris reading from poems that popped up when he did a computer search of 30+ years of his poems, Michael Peters doing scenes from "Saving Private Ryan" (better than the real thing), to Josh Potter reading from a story by Wells Towers, Colie Collen reading Juliana Spahr, to my "Baghdad/Albany," to the ulitimate invasion title for a poetry collection, Richard Brautigan's Rommel Drives on Deep into Egypt. 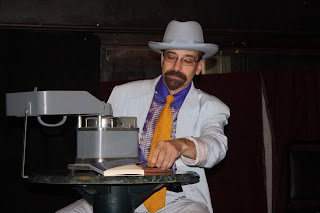 Find Douglas RothschildTM -- he's out & about at the Yes, Reading series, or at the Laundromat -- & buy his book.
Posted by DWx at 8:18 PM

Bravo, fantasy)))) [url=http://cgi1.ebay.fr/eBayISAPI.dll?ViewUserPage&userid=acheter_levitra_ici_1euro&achat-levitra]acheter levitra[/url] Yes, really. I join told all above. Let's discuss this question. Here or in PM.