For over 30 years we have celebrated Poets in the Park on Saturdays in July. The series was started by Tom Nattell, & I have been hosting it since 2005. This year I waited as long as I could before scheduling a reading, paying attention to New York State’s rules & guidelines for gatherings under the cloud of COVID-19. Finally it was announce that outdoor arts events could be scheduled for gatherings of 50 or less, & I breathed a sigh of relief — this is a poetry event so we have never had 50 people here. I decided that even if we couldn’t have a full schedule we could have at least one reading. 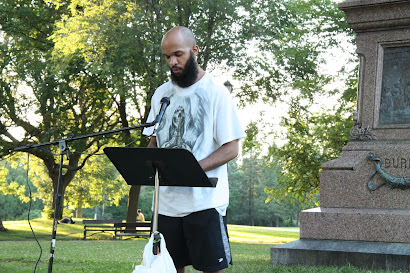 I had heard Austin Houston read at open mics, particularly at Poets Speak Loud, & felt he needed a venue to stretch out in & read more than 1 or 2 poems. He started his reading with what he called "an introductory poem," a philosophical statement of resistance, a theme & mode that ran through the work he read this evening, on what he described as “the COVID journey.” The poems included “Corona Madness” & “Pandemic” about hoarding & people exposing themselves to the virus, with a plea to be patient, then on to a couple of pointed, political screeds, “Corporate Greed,” & a piece about Trump’s playing “pretend” & his power addiction. “Drive-by” was a sad, descriptive poem about the recent flurry of shootings in the city of Albany. Back to the COVID theme, he pleaded with us “Don’t Be a Karen,” then ended on a quiet note with “Meanwhile” about the mundane details of daily life “while chaos reigns.” Hopefully we can get can back to open mics in the not-too-distant future & hear more of Austin’s work there. 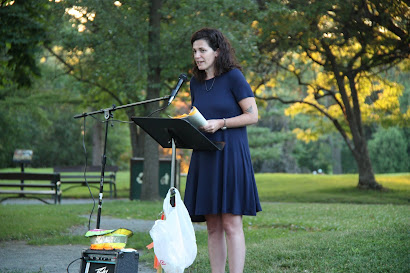 Sarah Giragosian has also read at area open mics, & at poetry festivals, as well as being featured at a number of venues, including the Third Thursday Poetry Night at the Social Justice Center. I knew that her new book The Death Spiral was forth-coming from Black Lawrence Press so I scheduled her to help promote it, &, fortuitously, she had received copies just this week. Most of her reading was from the book, beginning with the first poem in it, “Family History” a graphic tale of her great-grandmother’s surviving the Armenian Genocide, then on to an eco-poem “Mammoth Resurrected” questioning the cloning of extinct species. Referencing Austin’s work, she said that she too had written "Trump revenge poems" & read “Boldface, Pants on Fire” & a related fantasy, “The Second Moon Colony Will Not Fail." The poem “The Fourth Anniversary” was about celebrating with her wife, but haunted by a bad dream. The title poem of the book “Death Spiral,” Sarah explained, was about & described a dangerous courting ritual of the American Bald Eagle & was a metaphor for the politics of our time. She concluded with a poem from her first book, Queer Fish (Dream Horse Press, 2017) that she called “a queer bestiary” (an affirmation of homosexuality in all animal species), a tale of the long-eared hedgehog “The Queer Creatures that Rise at Dusk.” If you don’t have either of Sarah’s books, why not?
Perhaps next year we can return to a full schedule of Poets in the Park events, with the grace of face masks, social distancing, & perhaps a dose of vaccine.
May the Muse be with you.