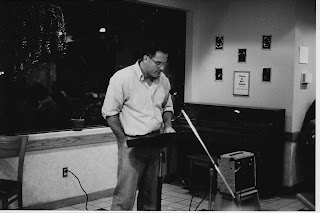 Tim Verhaegen has been a welcome staple in the local open mic/reading/community workshop scene for many years, back to the 1990s. The first photo of Tim I’ve been able to find is from an open mic at Border’s Bookstore in July 1996, hosted by Mary Panza, a decidedly thinner & darker haired Tim. Recently retired from government service Tim has attended some Zoom poetry meetings & got the bug — not COVID — to take the leap to organize his first open mic. He set the list as folks arrived & put the order of the poets to his whim, & we went around twice.

Tim assigned me the first slot & I read the recently typed up “Content Advisory,” then in the 2nd round read the elegy “To my Parakeet Berlioz.”

Cheryl Rice began the night’s sub-theme with a new piece still on paper “Mask,” then a melancholy, related piece about finally getting out to a restaurant “Blue Devils” for sushi & a Mai Tai with it’s sad umbrella in the 2nd round.

Therese Broderick read from her chapbook of pandemic poems, in the 1st round “A Shortage of Crumbs,” about missing the open mics, then in the 2nd round, reflecting Cheryl’s theme, with one about finally getting to the Sake Cafe “Zen & the Art of Eating Inside a Restaurant for the First Time in 4 Months.”

Frank Robinson did a political parody based on the words of Nobel Laureate, Bob Dylan, memorably “how many years must a turd persist before it is flushed to the sea…” then in the 2nd round an anniversary love poem to Therese, his wife — ahh! 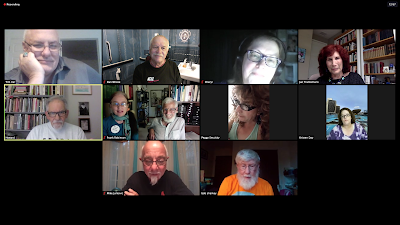 Howard Kogan was here from his home in Massachusetts to read about attending a poetry reading in a strange place “Die,” then in the 2nd round about waking up dead “One Morning.”

Bob Sharkey jumped into the issue of statues of former slave owners with “The Day Alice Green Drove Around the Philip Schyluer Statue” in front of Albany’s City Hall, then on the 2nd go around a strange poem from a prompt from a Bernadette Mayer workshop, “The Officer’s Hat” a memoir of piccolo player in a band & a hand job on a train.

Jan Tramontano was here from Florida, one of the pandemic hot-spots, to read the one COVID poem she has completed, “Il Nato,” about getting out a little, then in the 2nd round a descriptive piece about ex-Marine at “Paradise Nails.”

Mike Jurkovic is just down the River but didn’t have to drive to read a very new poem about pot smokers on the street “True Blue Sea,” then later one titled “Shamed Angels” referencing a magazine cover of Linda Ronstandt.

Kristen Day’s first round poem was an old piece about a trio in a nut house “Normal, Crazy, & St. Peter’s Girl Friend,” then in the 2nd round her hysterical, profane rant about rage at your ornery printer.

The sound of Peggy LeGee’s reading was a bit broken up but she was able to get through “Mommy’s Too Sick & Daddy’s Too Drunk,” then had better luck with a transition poem “A Little Girl Lost, A Little Boy Gone,” both poems in rhyme.

Our host, Tim Verhaegen, only read in the first round, a piece about breaking up from a 5-year relationship & what was wrong on both sides, “Boredom.”

This was Tim’s first foray, to my knowledge, in hosting an open mic anywhere, in any format & it worked quite well. There may very well be others in the future, stay tuned on social media — & keep writing.