Back at the Social Justice Center on this third Thursday, with our featured poet Melody Davis, & community poets signed up on the open mic list. But first to invoke the Muse, tonight the gone poet Ntozake Shange (1948 - 2018), with a reading of her poem “its happenin/but you dont know abt it.”

Don Levy was first up with a new poem “America is Port Authority” about strangers helping him get through the bus station with his cane & luggage, you might say what makes America great now. Kim Henry read an untitled poem about being born “ass first” as a metaphor for her life of denial, & healing. D. Alexander Holiday did a poem from memory by poet Dudley Randall “Ballad of Birmingham” to represent, as he said, for Black History Month. Amanda Pelletier read a poem about the guy she was on a date with some years ago right here at the SJC Third Thursday Poetry Night, an end of relationship poem, using the TV series Family Guy as a trope. 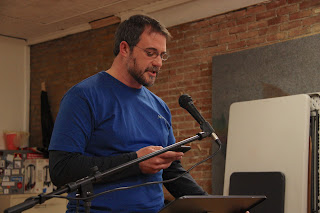 A new voice here, Jim, read a work-in-progress without a title, a political piece on the state of today. Joe Krausman commented on friends, unbidden, helping him out, as in Don’s poem, then read a poem inspired by a religious tract left on his car “If Not Today When.” I was the last of the open mic poets & read a new poem written on a recent retreat in Gloucester about the cottage where I stayed titled “Hanging Over the Edge.” 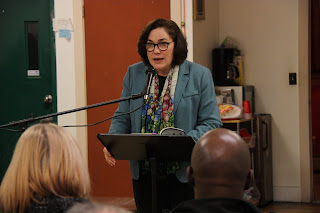 Tonight’s featured poet, Melody Davis, who had been a feature here a few years ago, was back to read from her new book, Ghost Writer (Broadstone Books, 2019), from a time of crises with her mother suffering & dying with Alzheimer’s disease, in 3 voices: her mother, herself, & herself as an 8 year-old girl. She began with a couple pieces with the 8 year-old, “We’ve been all over this,” “We got her where we want her,” then “Before I die” (where her mother thinks she’s been robbed but is wearing the "missing" watch). A short syllabic poem “What enters their space when neurons die?” was basically a list, & the ironical, humorous “Mom is sounding like my ex.” “Breath” is a meditation on remembering, & then 8 year old makes an appearance again in “We don’t get to choose whom we love” & “Rich.” Her father makes an appearance in a couple of memories of being in a bar & her parents smoking, “My father’s singing,” & “Smoke and mirrors.” “For-Cynthia” is based on a childhood memory of her mother mis-pronouncing the name of the plant. Then on to a selection of haiku from an earlier book, a collaboration with artist Harold Lohner, One Ground Beetle (Bad Cat Press, 2017). She returned to Ghost Writer to end with the poem “Ties” a walking meditation along the rail trail.