They sure do, as does our host, the irrepressible Mary Panza. Tonight’s featured poet was Glenn Cassidy, but first a few poets from the long sign-up sheet.

Marilyn Day started us off with an old piece, “Won’t,” inspired by the poet Adrienne Rich (1929 - 2012), a long poem with the repeating line “I know you won’t read this poem…” I followed with 2 poems from my recent retreat in Gloucester, MA “The Helicopters of Peace” & one mashing up a walk through East Gloucester with a Tarot card “The 6 of Cups.” Sylvia Barnard read 2 poems from her book Trees (The Troy Book Makers, 2012), both about a trip to where she grew up, “The Frogpond” & “Pilgrimage to Vermont.” Joe Krausman read a piece in his characteristic tongue-in-cheek rhyme about a conversation with his doctor “The Saw Bones Reply,” then a poem by Derek Walcott (1930 - 2017) “Love After Love.” 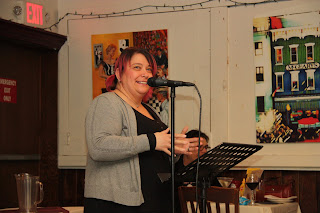 Nicole Monroe had started out some years ago on the open mic poetry scene, now a member of the band Hot Cousin, returned to her poetry roots with a funny homage in rhyme “To All My Gay Men.” Sally Rhoades shared 2 poems for & about her mother, “Resurrection,” & “Glazed Donuts” (which Sally prefers, while her mother liked jelly donuts). 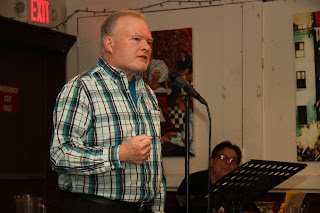 The featured poet, Glenn Cassidy, has been showing up here for the open mic since last Fall. Tonight he got a chance to stretch out a bit, & began impressively enough with a piece from memory, “Kiss,” a litany of “all the people who have kissed today.” Some of the poems he read stemmed from his work as a teacher, such as one about the best & the worst social studies teachers that he’s had, another a Jeopardy! inspired, “American History for 5,” & “Cultural Revolution.” Another piece from memory was about Massachusetts becoming the 1st state to legalize gay marriage the poem built on images of paper. There were a couple of Facebook-inspired poems, the funny “Grandma’s on Facebook,” & “Poked,” & even being on the bus can be an inspiration (“Infinitely Annoyed”) to think about the varieties of infinity, or taking a leak, “Pondering Economical Development while Taking a Piss in a Public Bathroom.” He ended on a tender note, “Mom Hasn’t Called Today.” It was a well-put-together poetry set.

The on to what was left of the sign-up list, with Amanda reading her poem on the varieties of bullies, “Calamine.” D. Alexander Holiday reminded us once again that it was Black History Month with a reading of June Jordan’s (1936 - 2002) poem “To my Sister, Ethel Ennis, Who Sang ’The Star-Spangled Banner’ at the Second Inauguration of Richard Milhous Nixon, January 20, 1973,” then on to his own poem, a rarity in rhyme, “The Scars.” Kristen Day read a poem about an all-too-common source of anger, the printer, but added her own special brand of humor to “Print Rage.” 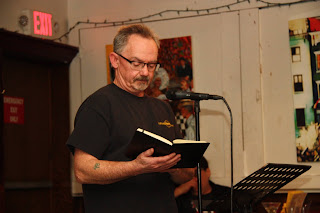 Tom Riley mushed together 3 Winter poems to create a sort of poem/snowball about the art of shoveling snow. Julie Lomoe read a long, rambling essay on aging & death, “Celebrating Life & Death the Unitarian Way.” Austin Houston was back with us to be the last reader of the night starting with “Power is the True Test of Sanity” then a poem on how some can see a rainbow, others not.

Poets Speak Loud! is hosted by Mary (Hooker-Foot) Panza each last Monday at McGeary’s Irish Pub, Sheridan Square, Albany, NY, stating anytime between 7:30PM & 8:00PM - a featured poet & an open mic for the rest of us.
Posted by DWx at 11:14 AM