Another Summer night at the Social Justice Center for poetry. The featured poet was Perry Nicholas & an open mic for the rest of the folks there. But first I invoked the Muse, tonight the gone poet Colette Inez (1931 - 2018). I read her poem “Service for Two, I Shall Dine with Myself.”

With only a handful of poets in the house, the “only rule” was cancelled & the open mic poets were allowed 2 poems. Tom Bonville was first on the list & he read a short, tender piece “Shadows of Love,” then “The Day After” set in Walmart.

This was Joe Krausman’s birthday (he has been telling folks he is "39" but I realized that perhaps he is dyslexic...) & he celebrated by reading poems about death, “The Great Chain of Being,” & “Bacon & Eggs,” that with the eggs sunnyside up makes makes a happy face. 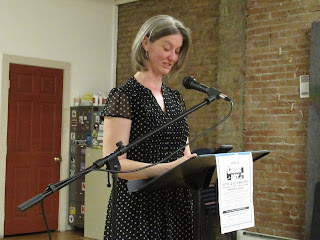 Kim Henry made a rare appearance here to read an untitled piece about an old woman dying, saying “my soul is tired,” & another poem on the theme of crying & parting.

Don Levy was also able to get here tonight & read off his phone a recent new poem “I Heard the Black Mermaid Singing,” then read from an anthology Muriel Rukeyser’s apocalyptic “Nuns in the Wind.”

I read a new Summer poem “Shopping for White Underpants,” & a Haiku mixing the Buddha & a martini. 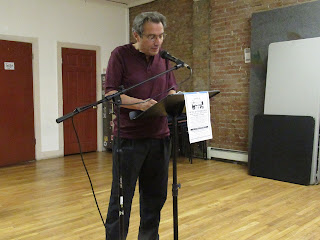 Perry S. Nicholas is a poet & a professor at the Erie Community College North in Buffalo who is on a tour that included readings in Schenectady & in New Paltz. He started with poems written on a trip to Greece in 2013, the first a description of the hotel he stayed in as he came back to Greece, then one about his neighbors “The Loud Greek Family Next Door,” & a poem about returning to the US “There Aren’t Enough Stars.” A boyhood memoir “Water on Mars” was about his mother speaking Greek. “In the Shadow of David” was a poem about his daughter & their distance, & his next was a love poem, “I Picture You All Ages.”  He moved on to his new chapbook Why I Learned to Spell (The Writers Den, 2019), read the title poem a true story about his immigrant family, then the unsettling experience of “A Greek-American Reads Poetry at an Americana Bar,” & on to last year’s birthday poem “A Brand New World” remembering his father. Poems about religion included “Good Friday” about his upbringing as Greek Orthodox then on to now “The Church in My Head.” He ended with a love/non-love sonnet “I Disremember.” In addition to Why I Learned to Spell he also had for sale a CD And I Was Just a Boy, poems from 2013 to 2018.