The 2nd of the 3 Poets in the Park this year was a reading by 2 of the winners of the 2019 Stephen A. Dibiase Poetry Contest, Ken Holland & Mary Kathryn Jablonski. Although the day had been oppressively hot & humid & threatened thunderstorms, the Sun was already behind the trees by the time we started & a breeze ruffled the banners on the Poet’s Pole; the thunderstorms stayed off to the North. 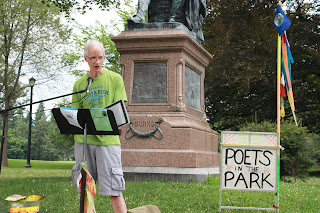 Ken Holland took first place in the 2019 Stephen A. Dibiase Poetry Contest for his poem “Habana.” He began with a “Dead Poet” in the bushes, then “Soundings of Rain” with jazz & images of his daughter as an infant. “All the Pretty Girls” mixed Summer heat & firecracker's pain, while “Home” was another Summer scene of a barbecue but sad, grim, & “Terracotta” a poem of lost love, moon, & heat again. The poem titled “Dirigibles” mixed God, survival & breath & dreams, which led him to describe his 2 main themes as “organized religion” & “the environment” both showing up in the poem “The Waves Collapse.” The surrealistic juxtaposition in the title of “Whale Oil & the Comedian” was a meditation on mortality & angels, which led to more angels in the poem “Laughing Angels.” He said he had never read out before his poem “My FM God,” & in “Way Station” mixed the historical & personal. “Westward Ho!” was a summary of the disasters of western civilization. He ended with a take on E.A. Poe both in sound & topic, a poem from his college years “What The Raven Might Have Said” in a sing-song rhythm & repeating sounds. It was reading filled with an entertaining mix of subjects, images, & sounds & a great introduction to a poet whose work I didn’t know well. 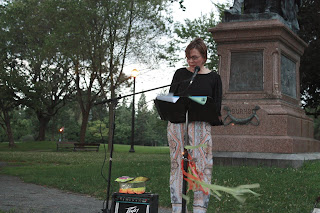 Mary Kathryn Jablonski, on the other hand, is a poet whose work I know well & admire, & had even published her chapbook To the Husband I Have Not Yet Met in 2008. She has included those poems in her new book, just out earlier this year from Dos Madres Press, Sugar Maker Moon. While the book is new, the poems in it are about 10 years old she said. She read mostly poems from the book, but graced us with a couple new pieces at the end, all playing on the theme of Summer. She began with poems named after the seas of the Moon, “Mare Nectaris” a litany of flowers from her mother’s garden, then to her mother again “Mare Nubium,” & “Mare Crisium.” Then on to one of the poems in the series of letters, “To the Husband I Have Not Yet Met #7," also filled with the names of flowers & butterflies. In her introduction to her reading, Mary Kathryn explained that that “husband” could also refer to other relationships, including the self, mother, child, a theme also explored in the “Mare” poems. In “Mare Spumans” she took us on a rare visit to the sea shore, then returned to the Husband poems, this #11, starting with her friend David playing the ukulele & ending with the “husband’s” voice. She returned with one more from her book, a richly imaged & musical poem “Mare Cognitum” that even quotes her grandmother in Polish. She ended with a couple of newer pieces, “Josephine” written just yesterday for her brother Paul with another litany of the names of flowers, & concluded with a tribute, of sorts, to Laika the Soviet Space Dog, the last words summing up: “to know kindness.” The best way to know the work of Mary Kathryn Jablonski is to buy Sugar Maker Moon & devour it.

There was one more evening of Poets in the Park coming up, which you can read about soon, right here.

What an honor: to be part of the 30-year Anniversary of "Poets in the Park." Thank you for this opportunity, Dan, and to Ken Holland, who was wonderful to read alongside. Thanks also to all in our audience who came out and braved the oppressive heat and storms, which managed to hold off JUST until we loaded everything back into our cars! It was, in its own way, a magical evening for poetry, punctuated by summer thunder and wild winds! - Mary Kathryn