The Albany Public Library Foundation has named me, novelist Peter Golden & poet Lyn Lifshin’s as their Literary Legends for 2019. The major event will be the annual gala on October 19 with food, drinks, music, but in the meantime the Foundation held some more modest events to introduce us to the public.

On May 30 Peter Golden & I gathered with a roomful of friends to give brief readings & talk about our work, answer questions, even debate the character & legacy of Richard Nixon, MFA programs & professor-poets who only show up at readings when they were paid. The discussion was moderated by Albany Public Library Foundation Director Lex Bhagat.

Lyn Lifshin, who has a house in Niskayuna but spends much of her time at her home in Virginia, was unable to attend the May event, so separate events to celebrate her were scheduled in June with Lyn in attendance. The first being on June 13 at the Opalka Gallery in Albany with a screening of the 1987 film my Mary Ann Lynch, Not Made of Glass. The film takes you inside Lyn’s home, her archives — vast even then — & includes interview & readings. Prior to the showing the film, there was a Skype phone call from poet Arielle Greenberg in Maine, who read Lyn’s well-known poem “Hair.” I had originally seen the film in October 1989 at the Albany rock club QE2 where Tom Nattell ran poetry readings; both Lyn & Mary Ann Lynch the filmmaker were in attendance.

The following evening,  June 14, there was a reading of Lyn Lifshin’s poems by local poets. Again, Lex Bhagat did the general introduction, & I served as host of the reading. Many of Lyn’s friends from the area were there to greet her & celebrate her role as Literary Legend. Joe Krausman read a poem by Lyn titled “The Hanukah Bush” that had appeared in a journal that included one of Joe’s poems as well. Likewise, I read Lyn’s poems “Bloody in the Light” & “At That Last Spinning Moment” that had apppeared in the only issue of a mimeographed zine called The Old Woman from 1967 (by best guess) that also included a couple of my poems. 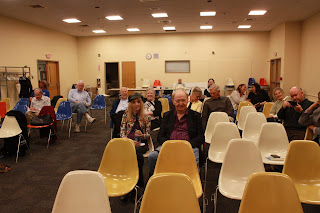 Mary Panza read from Lyn’s 1987 book Raw Opals “The Next Door Neighbor is Moving” & “For Three Days Things Kept Changing.” Lex Bhagat read from the Black Sparrow Press Selected Poems 1970 - 1996 Cold Comfort (1997) from the section on war titled “And These Bones Do Blossom” the poems “It Was Like Wintergreen” & “Treblinka.” Sally Rhoades read from the 1991 Before It’s Light, beginning with “That August 24th;” then commenting that she wanted to read one of Lyn’s longer poems, dove into the long, pornographic “Jackie O Reads the Story of O Again,” then left us with the much shorter, calmer “It Goes On.” Lyn didn’t read, but did take questions about her current work, the fate of her archives, & others.

Back in the earlier days of the start of the poetry scene at the QE2, organizer Tom Nattell booked a program that included Lyn Lifshin, Joe Bruchac & Ed Sanders in March, 1988. Later that year, in July, Lyn read with the poet Ione, & I’ve already mentioned the screening of Not Made of Glass in 1989. Tom also included Lyn in the Poets in the Park series in July 1998 reading with Laura Boss. I also saw her read in July 2006 at Caffè Lena reading her poems about the race horse Ruffian.

Hi thanks foor posting this