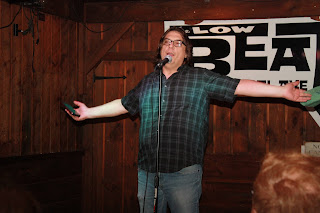 Another in the continuing series of open mics at The Low Beat in Albany, NY. Tonight’s guest host was Albany rocker Nick Bisanz, who got us off to an appropriate start with a reading of the lyrics of The Cars’ song “Touch & Go” by Ric Ocasek. Then on to those who had signed up for the open mic.

Reed has become a regular here, as he also attends the comedy open mic on the other Tuesdays (so I’ve been told); tonight he rambled on about the/many Harry Potter movie/s, trying to recall what happened while wanderings into many divagations. Zahim Mowin followed in a similar tack talking about films in the Friday film series, reciting memorized scenes, but not mentioning the title (or titles) of the film(s) (I think he also signs up for the comedy night so be warned).

Brett Petersen can be just as meandering but his drifting is more from the Surrealist tradition of automatic writing & as such has more a semblance of art; his first piece was in that vein & titled “Comintell,” while his his second poem had one of those long, un-transcribable titles that could be poem in itself, & ended up as as the last line, “Gallons of Cyanide Poured On the Head Of …”

Shane Nanson (another regular at The Low Beat) read a couple pieces like jottings from his therapy session's  notebooks, then a wide-ranging meditation on poems & rhyming with excursions into The Iliad, The Odyssey & Haiku. Christa (another favorite here & elsewhere) confused me by describing her rhyming poem as a “sestina,” & it might have been but I couldn’t pick up the repeating end words & the rhyming lines seemed to be be very short, it wasn’t titled but played off the phrase “I’m not there…”

One of the night’s surprises was the return to Albany, briefly alas, Jessica Rae, who apparently has been working on her craft, her first poem about her 23-year old self & based on her 10 favorite words, then a piece about an audition “Anywhere Else,” & ended with a poem about a dream of growth away from anxiety, the title the name of a plant.

This open mic continues each 1st & 3rd Tuesday at The Low Beat on Central Ave. in Albany, 7:30PM -- you may get more laughs for this event than on "comedy night."