Poetry in Science - a Night of Inspiration, March 5


Kate Gillespie, who identifies herself as a poet & a scientist, raised the issue some months ago of a reading of poems on themes of science. It was originally scheduled for February 12, but a snowstorm intervened & we were re-scheduled to this night. We gathered in a mezzanine at the Albany Pump Station, & the event was part of a series of programs organized by CapSciNY.org

Cara Ocobock served as MC & got us on the correct path with a poem titled “In Geology Hour” by Charles Kellogg Field.

The first of the scheduled readers was Kate Gillespie whose poems personified the essence of poetry + science with not only science themes but also rich use of the terminology & language of science. She began with a poem inspired by the harbor in Baltimore “Harboring” talking about the chemicals & microbiologic life in the water, followed by one titled “Deep Water” with intricate weaving of science terminology. She also read an ekphrastic poem based on a picture of a dried river bed. In “The Misconceptions of Microbes” she wonder what if they, the microbes, were poets? Other poems dealt with the Eukaryotic initiation factor 3 (eIF3) which has the ring of poetry itself & of gene splitting, even one about the molecular nature of glitter. She ended with another piece about microbes “To the Arising Civilizations on my Right Hand.” 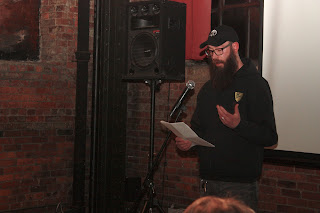 Despite this seemingly high bar, each of the following poets had their own, unique take on poetry & science. Matthew Burns said he was not a scientist, & as a poet has not read out much. But his poems were engaging in a more macro-Nature sense, most of them about the Pacific Northwest. He read a couple of meteorological poems, including “In Winter” about driving through the Cascade forest, another titled “Relative Chronology” thinking about Time, another on the lupines “On the Bear Canyon Trail." He ended with an provocative piece titled “5 Practical Uses for Human Bones.”

The following performers, Kendall Hoeft & Carol H. Jewell, are seen frequently on the local poetry scene, & tonight teamed up with Carol reading Kendall poems while Kendall danced around her. The pieces were expressive, loosely based science poems with titles like “The Typology of Water,” & “Triassic Love.” “Hermit Crab” featured Kendall as the crab bursting out of its shell, it’s long arms (if it had them) extended in freedom, & I loved the title of “Father Kaleidoscope.” In the final piece, “After Class,” Kendall invited audience members, some of whom had attended her poetic movement classes at the Arts Center, to join her dancing as Carol read the poem.

That was a perfect time to take a short break to catch our (collective) breaths, grab a beer, etc., then on to the remaining poets on the program, coincidentally Nancy Klepsch & I who are co-hosts of the 2nd Sunday @ 2: Poetry + Prose Open Mic at the Arts Center of the Capital Region.

My science poems ranged from an early piece on sub-atomic particles & Arctic terns “Z0,” to the astronomical “The Transit of Venus” & “Spathe is the Plathe” (on the so-called Great American Eclipse of 2017), to a piece on the reasons stores of used books smell they way they do, “Decomposition.” My last piece was inspired by a 1989 performance by Bern Porter at the QE2 on Central Ave. in Albany, “Physics.” I had a lot of fun. 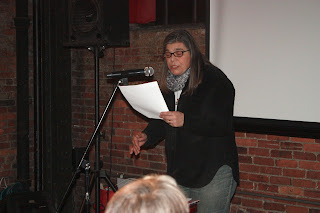 Nancy Klepsch read a mix of newer pieces & poems from her 2017 book God Must Be a Boogie Man (Recto y Verso Editions) beginning with her funny/loving conversation with “Siri,” then a poem about turning into a cyborg “My Cells.” Her poem “Schroom” came from a workshop with the poet Bernadette Mayer, while one titled “I Am the Algorithm” was inspired by the website Send Me SFMOMA -- if you text them a word, color, emoji, they send back a related artwork image. Her final 2 poems “Rubylith as a Revolutionary” & the list poem “Things that Are Worth $10,000 are both in her book.

We had a good audience, an appropriate mix of people interested in science & those interested in poetry, as well as real scientists & real poets. & I found it a perfect forum to pitch my campaign, contra Channel 13, of “Less S.T.E.M. (science, technology, engineering, math), more C.R.A.P. (creativity, reading, arts, performance).” Visit the CapSciNY.org website & Facebook page about other programs in the area.