Getting Down to Brass Tacks, March 19


It’s a busy week for poetry, as many are here in Albany. Last night Poetic Vibe, tonight back at The Low Beat for Getting Down to Brass Tacks with Ian Macks feauted & an open mic. Our host was el presidente of AlbanyPoets Thom Francis.

& once again I was first on the list with 2 recent pieces, “Hey!” about an encounter with a gull in Gloucester, & a poem incorporating lines from another poet “Reading Mary Oliver while Masturbating.” The elusive Matt Galletta was here to read the metaphorical “The Professor” speaking to a hole in a cave, then the wry “Let it Kill You.” The equally elusive Shane read an untitled unfinished piece about the question of what do we do with our demons. The poet who signs up as Slay the Dragon read the same poems he read last night at Poetic Vibe, but in a reverse order, which worked better, “Vicious Ending” in the persona of Sid Vicious, & “My Name is Gregg & I’m Addicted to Poetry.” 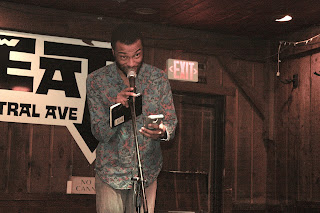 Ian Macks, tonight’s featured poet, is back in town with his poems after a hiatus with AmeriCorps. He began with some poems from a chapbook he produced when he was in his 20s, the poems titled “Dr. Manhattan,” “Cradle,” & “Now This” (brain freeze). His poems were a mix of topics & moods but all sprung from his day-to-day experiences, such as observing others at a bar, or a homeless man, or at Starbucks (titled ironically enough “Breakfast at Tiffany’s”). He included a couple of poems written as definitions, “Vulnerability” & “Windswept.” Others included a love poem to his girlfriend, a poem on mortality titled “When Your Car is on Fire…,” “The Drop,” “Keep Walking,” & personal meditations like “What Does It Take to Get You Off,” “Eulogy for the Former Me,” & “Flatiron.” His last poem was a letter to a friend who ended up in jail. We’re glad to have his voice & words back here in Poetry Capital.

Thom Francis took a turn at the mic with a couple of untitled pieces, about his daughter having no fear among strangers, wishing he had that too, then one about connecting to memories via the things in his pockets. 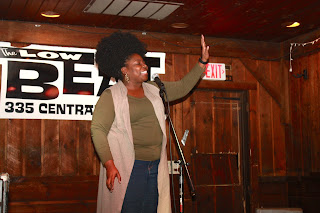 Coco Flo was visiting from Charlotte, NC & recited 2 pieces from memory, the first about when she was 11-years old, a man who inspired her, the next titled “Invisibility” the super-power she would want, but it reminds her of her father who was invisible.

Nick Bisanz made a rare appearance on a stage without a guitar & reading poetry instead, about the death’s of wrestling heroes in Winter, such as King Kong Bundy, & other wrestling stories. Also making an equally rare appearance was our habitual bartender, Kim Dreizehn, with a rhyming poem about her cat. Last up was Allie who read a love poem “Your Love Sustains” apparently just-written on the backs of a couple Third Thursday fliers I’d just given out.